McKercher and Capet on Churchill, War and War’s Aftermath 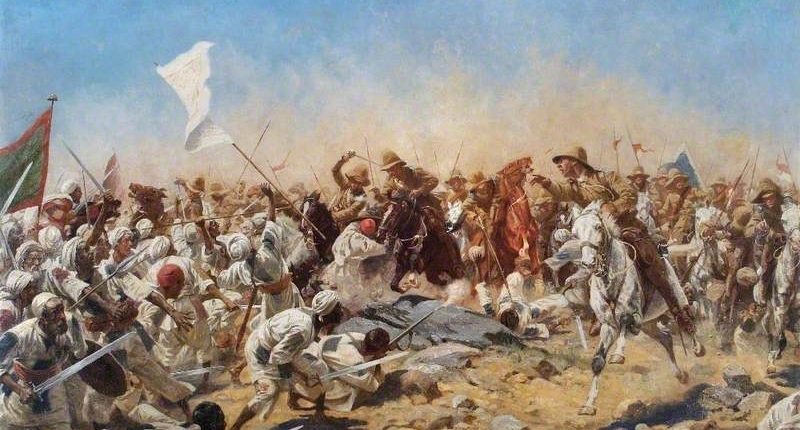 Prior to the Second World War, Churchill had been a soldier, statesman, military historian, and writer on military affairs. As is noted in the book’s introduction, “his military service and efforts in and out of the Cabinet in fighting and thinking about war prior to 1939 provides a telling prologue to whatever he achieved as a warlord during the Second World War.” This collection of eight important essays is derived from a conference, “Winston Churchill (1874-1965) in Peace and War,” held in Paris in September 2015. The primary audience of the volume are scholarly readers. The price will discourage many otherwise interested readers, but Amazon offers a modestly priced Kindle rental.

James Muller leads off with “At War on the Nile: What Winston Churchill learned from the River War.” He discusses Churchill’s participation in the Sudan Campaign of 1898 as a young cavalry officer and his subsequent book The River War. Muller concludes that the book “still offers a definitive account of the re-conquest of the Sudan and a thoughtful exploration of the problems of war, empire, race, and religion that Churchill first encountered in the late Victorian era – which are very much still our problems today.”

John Maurer provides “‘A Dangerous, if not Malignant Design’: Winston Churchill and the German Naval Challenge before the First World War.” As First Lord of the Admiralty from 1911, Churchill was responsible for British naval security and directed British policy and strategy in the Anglo-German naval competition. In seeking to keep Britain ahead, Maurer writes, Churchill had to walk a “political tightrope.” Proponents of preparedness applauded; those who opposed higher spending thought Churchill was merely provoking Germany. Many of the latter were in Churchill’s own Liberal Party and in the Asquith government. Meeting the German challenge required Churchill to employ his “skills in administration, strategic assessment, execution of policy, political maneuvering, and powers of expression” to build and maintain a domestic “political consensus.”

In “‘By God, I will make them Fight!’ Winston Churchill and Britain’s Decision for War in 1914,” John W. Young writes that Churchill was the “foremost exponent of British intervention.” As the crisis unfolded, Churchill readied the navy for war and pushed his cabinet colleagues, often acting without their approval. He relied instead on the support of Prime Minister Asquith. Young also examines Churchill’s decision during the July crisis to seize two dreadnoughts in British shipyards that had been ordered by Turkey. It was later claimed that this drove the Turks into war on the side of Germany. Young concludes that it was probably best that the ships were seized. Turkey was already in talks with Berlin. Had the dreadnoughts been delivered, this reviewer expects there would have been repercussions. And Churchill, no doubt, would have been criticized for failing to stop the delivery. (See also: “Did Churchill Really Want World War II?”

Churchill’s standing with press and public was high at the start of the war. But within weeks he was the target of a press campaign demanding he be forced out as First Lord of the Admiralty. Christopher Bell offers an excellent essay, “Churchill’s Downfall in 1915: The British Press and the Dardanelles Campaign.” By the end of 1914 the Conservative newspapers were depicting Churchill “as a loose cannon who was personally responsible for some of the worst setbacks that Britain had suffered in the opening months of the war.”

Churchill, Bell writes, was “frustrated by his inability to lash back at his critics in the press.” The newspaper attacks intensified with the naval failure at the Dardanelles. Churchill was ousted in the political crisis of May 1915, that led to the forming of the coalition government. He eventually joined the forces on the Western Front, describing himself as “the escaped scapegoat.”

Bell writes that the press campaign was a “mixture of truths, half-truths, and outright fabrications.” The theme was that Churchill “routinely ignored his naval advisors” and was “a reckless amateur with fatally flawed judgement.” There is, Bell concludes, “enough truth in these charges” that they were embraced at the time and a century later are “still going strong.”

Will Morrisey, in his chapter “What Churchill and de Gaulle Learned from the Great War,” finds that neither Churchill nor de Gaulle shared the “common reaction to the war—in essence, democratic disillusionment with all war and a consequent pacifism.” Instead, “they steeled themselves for the continuation of the regime conflicts that they foresaw.” Both drew the lesson that humanity had not progressed as “nineteenth century sages” had claimed. As such, Churchill and de Gaulle did not attempt to “push History forward.” Instead they tried to “rebalance moral and political life with weights they pulled from the classical bedrock of the West.” (See also: “Churchill and de Gaulle: the Geopolitics of Liberty.”)

Editor McKercher criticizes Churchill’s portrayal of Appeasement in his first volume of Second World War memoirs, The Gathering Storm. In “The Limitations of the Politician-Historian,” McKercher says Churchill’s “tale of folly on the part of successive British leaders” is “woefully inadequate as an historical analysis in understanding how war came.” The Gathering Storm, McKercher continues, is an “egotistical chronicle” which ignores the “complexities” British leaders faced in “building effective strategy based on rearmament and doing so within confines established by electoral and public opinion concerned as much with domestic issues.”

McKercher rather overstates his case. Take for example his claim that “the patrician, Churchill, lacked any understanding of post-1918 British electoral politics.” Churchill ran for election eight times between 1918 and 1935, winning five times. This reviewer thinks it safe to say he had, at the very least, some understanding of electoral politics.

McKercher further writes that “until early 1938, Churchill remained ambivalent about Hitler.” This is a familiar recitation, but more complicated than McKercher states. It is true that Churchill moderated his criticism at various points in the 1930s, hoping for return to government. Like all politicians in a democratic society, he also took into account the public opinion. But from Hitler’s rise to power in 1933, Churchill was consistent about the Führer. In April 1933, he called Nazi Germany a “most grim dictatorship,” condemned the “persecution of the Jews,” and emphasized the importance of France.

“I cannot help rejoicing,” Churchill continued, “that the Germans have not got the heavy cannon, the thousands of military aeroplanes and the tanks of various sizes for which they have been pressing in order that their status may be equal to that of other countries.” Six short years later, Appeasement, and the slow pace of British rearmament under Baldwin and Chamberlain resulted in Nazi Germany having the heavy cannon, aeroplanes, and tanks of various sizes needed to overrun a greater part of Europe.

Churchill made news, and news made him

In “Winston Churchill and the Golden Age of Journalism” Richard Toye writes that “before Winston Churchill made history, he made news. To a great extent also, the news made him.” Toye considers Churchill’s work as a war correspondent and journalist—and how press, film, and radio affected his political career. Throughout this period, journalism was undergoing great changes brought by new technology, such as the telegraph, telephone, and radio. Toye writes, “Churchill’s image and indeed his literary style were shaped by the media technology of his age.”

Like all prominent politicians, Churchill sought to shape his image in the press (using such props as his legendary hats and, later, cigars). Hoping to influence favorable coverage, he downplayed his setbacks and highlighted his successes. But Toye underrates Churchill’s treatment by the press by describing it as “sometimes bruising.” As illustrated in Bell’s chapter, press treatment (and animosity within his own party) was a contributing factor in driving him from the Admiralty in 1915. His press treatment then was more than bruising; it was nearly fatal.

Islam and the Mideast

Warren Dockter, in “Winston Churchill, Islam, and the Middle East,” discusses Churchill’s attitude towards Islam and his role in the making of the modern Middle East. Dokter corrects the “misconceptions” that Churchill was “little more than indifferent to matters in Islamic regions and that he was, in general, contemptuous of Islam.”

Churchill’s critiques of Islam in The River War are, argues Dockter, “problematic” in determining “Churchill’s lifetime position on Islam.” When he wrote that book in 1899, Churchill was going through an anti-religious phase (Dockter notes certain comments removed from subsequent editions). Further, Churchill was writing specifically about the fundamentalist Dervish Moslems, not all Muslims.

Dockter also considers Churchill’s relationship with the Middle East as First Lord of the Admiralty and later Colonial Secretary. “It is important to note that Churchill’s relationship with Islam was not limited to the Middle East,” he writes. There was, for example, his thoughts about the fate of Indian Moslems in an independent India. “Churchill’s views of Islam in many ways can seem patronising and problematic,” Dockter concludes. But “they were nonetheless a great deal more nuanced and sympathetic than is generally appreciated.” (See also “Churchill on Islam.”)

Have provided a collection of substantive and challenging essays. Their book offers many useful observations that will stimulate further historical discussion and scholarship. It is only unfortunate that the price of the book will keep it from the attention of many.