Churchill at War, Illustrated by Cigarette and Trade Cards 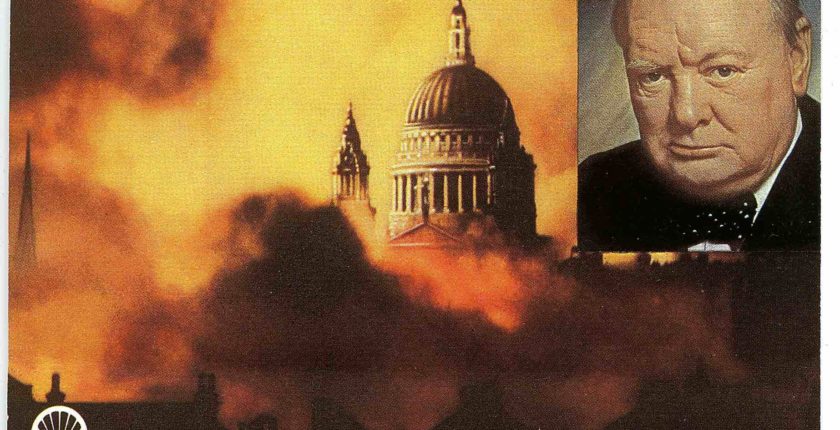 Recognition of the dangers of smoking led to the demise of cigarette cars in the 1970s, but to this day, cards are produced by other companies. This evocative image of WSC and the London Blitz is from the Shell Oil Company’s “Great Britons” series, 1972. (All illustrations herein by courtesy of the author)

Recognition of the dangers of smoking led to the demise of cigarette cars in the 1970s, but to this day, cards are produced by other companies. This evocative image of WSC and the London Blitz is from the Shell Oil Company’s “Great Britons” series, 1972.  (All illustrations herein by courtesy of the author)

The earliest cigarette cards trace their origins to the Crimean War of 1853-56, when smoking rose to the heights of popularity. Originally, cards were plain stiffeners in the cigarette packs. With advances in printing and lithography, it did not take long for the tobacco companies to recognize the marketing potential of illustrated cards. Non-cigarette companies also recognized the potential, but in the early years, cigarette cards predominated.

Sets of cards were issued covering a wide range of topics: nature, science, transportation, architecture, war and famous personalities. Cards sought to be educational, with an image on one side and a description on the reverse. The name of the set and the issuer were also shown.

The Second Anglo-Boer War, which catapulted Churchill into fame, was a major stimulus to sets of war cards. Production of cigarette cards flourished, with only short breaks for the major wars, through the first half of the 20th century. Recognition of the dangers of smoking led to the elimination of cigarette card production by the 1970s. But to this day cards are actively produced by a variety of companies.

Andrew Roberts, in Churchill: Walking with Destiny, noted that Churchill always wished to experience areas of crisis first-hand, both at home and abroad. Though often risky, it gave him insight and advantage in making his political and military decisions. His personal experiences began soon after he graduated from the Royal Military College at Sandhurst in 1894. A few months later he was commissioned into the 4th Queen’s Own Hussars (Fig. 1). Two years later he was sent to India as a Lieutenant (Fig. 2). While there he reported the war in India’s North-West Frontier, now part of Pakistan. This experience resulted in his first book, The Story of the Malakand Field Force.

After Churchill returned to England, pressure mounted to avenge the death of Charles Gordon, governor of Sudan, who had been killed by Muslim revolutionaries in 1885. In 1898 Horatio Herbert Kitchener was charged with organizing an expedition to reconquer Sudan. Churchill arranged to join this expedition against the Sudanese Dervishes (Fig. 3). In the Battle of Omdurman, Churchill fought with the 21st Lancers, participated in a famous cavalry charge (Fig. 4). The Dervishes were decisively beaten (Fig. 5) and Churchill described the campaign in his second book, The River War.

When the Second Anglo-Boer War began in October 1899, Churchill went to South Africa as a correspondent for The Morning Post (Fig. 6). There he joined troops sent to relieve the Siege of Ladysmith. They were stationed at Estcourt, from which armored trains made reconnaissance runs (Fig. 7). On 15 November Churchill’s armored train was ambushed and he was taken prisoner. He made a daring and now famous escape (Fig. 8). From Lourenço Marques (today’s Maputo), he took a ship to Durban. He returned to England and a hero’s welcome (Fig. 9).

In 1911, aged only thirty-seven, Churchill was appointed First Lord of the Admiralty (Fig. 10). Thanks to him and his First Sea Lord, Admiral Fisher, the fleet was ready when war came three years later. In May 1915, Churchill fell from office over the Dardanelles and Gallipoli campaigns, both major setbacks for the British in World War I. The initial attempt to sail through the Dardanelles was abandoned by Admiral Sir John de Robeck, whom Churchill nicknamed “Admiral Row-Back.” Britain’s most powerful battleship, the new dreadnought HMS Queen Elizabeth, was involved in bombarding the forts of the Dardanelles (Fig. 11).

Churchill remained in the Cabinet, but without responsibilities. Wearied by his lack of influence, he resigned in November to join the troops on the Western Front. As a Lieutenant-Colonel, he commanded the 6th Battalion, Royal Scots Fusiliers (Fig. 12). Favoring a blue French poilu’s helmet, he was stationed in Ploegstreert, Belgium, in southern Ypres, although not a part of the hotly contested Ypres Salient (Fig. 13). He remained there until May 1916 when he returned to England, where he was still a Member of Parliament.

During World War I Churchill successfully promoted two new military developments. The first was the use of airplanes as instruments of war. The second was the concept of a “land caterpillar” that could cross trenches and trundle over barbed wire—the tank (Fig. 14).

In 1917 Prime Minister David Lloyd George brought Churchill back into the government as Minister of Munitions. There he was responsible for shell production, which was vitally aided by women workers (Fig. 15). Shortly after the November 1918 Armistice, he was appointed Secretary of State for War and Air, but no cards depict him in those offices.

Churchill believed his entire life had been a preparation for its culminating moment, leading his country in World War II. Unlike his previous war experience, it was now purely political. In September 1939 he was again appointed First Lord of the Admiralty. Cards depicted him broadcasting to the nation (Fig. 16). In May 1940 he became Prime Minister. Several cards show him at this period. (Fig. 17).

Illustrations of Churchill on wartime cards include portraits of him at different times by a wide variety of issuers. Some cards show him with other notables, visiting war locations, and attending conferences with allied leaders.

Churchill traveled widely throughout the war. In August 1942 he flew to Egypt, and then Moscow to meet Stalin. This trip was prompted by a succession of defeats suffered by the 8th Army (Fig. 23). During the North African Campaign he met with a number of leaders, including Allied Commander-in-Chief General Eisenhower in Algeria (Fig. 24).

Rome was liberated in 1944. There in August at the British Embassy he chatted with British and American reporters (Fig. 25). In November he was in Paris to celebrate Armistice Day. A card depicts Churchill and de Gaulle at the flower-covered tomb of France’s Unknown Soldier (Fig. 26).

Churchill conceived of “meetings the summit” among allied leaders. Together with President Roosevelt in Newfoundland in August 1941, he signed on to the Atlantic Charter, a declaration of aims and principles of the two countries (Fig. 27). The Teheran Conference, the first with all three Allied leaders, occurred in November 1943 (Fig. 28). No cards depict the Yalta conference, but the final wartime summit in Potsdam is represented (Fig. 29).

Important in the cards industry was Victory-in-Europe Day, 8 May 1945. The King and Queen, with the two princesses and Churchill, stood on the balcony of Buckingham Palace acknowledging the cheers of the crowd. (Fig. 30). Two months later, the general election ushered Churchill out of office.

The most significant of all

A prized piece in Churchill cartophily was not a cigarette card of all, but a postcard-size keepsake bearing two striking images of World War II. The obverse was a reproduction of a verse from Longfellow, “Sail on, O Ship of State” (Fig. 31). Roosevelt had quoted this to Churchill in February 1941, saying “it applies to you people as it does to us.” Churchill commissioned the illuminated verse, taking several copies to the Atlantic Charter meeting in August. Originals signed by both leaders are highly sought after today.

On the card’s reverse is another famous wartime image (Fig. 32), from an American propaganda poster issued in 1940, after Roosevelt had won reelection. Its intent was to promote American aid to Britain as the best bastion against Hitler. Drawn by the illustrator Henry Guignon, it was the first (but not the last) to graft Churchill’s jowly features to the body of a bulldog.

Dr. Mazansky is a retired radiologist living in Newton, Massachusetts. He has collected cards (cartophily) for nearly forty years. His collection is thematically based on the military, regal, political and social history of Great Britain. He is the author of British Basket-Hilted Swords and The First World War on Cigarette and Trade Cards. The latter uses these cards as the basis for the book.