The Churchill Project - Hillsdale College > Articles > Q & A > Personal Matters > How did Churchill Cope with Stress and Anxiety? A Primer.

How did Churchill Cope with Stress and Anxiety? A Primer. 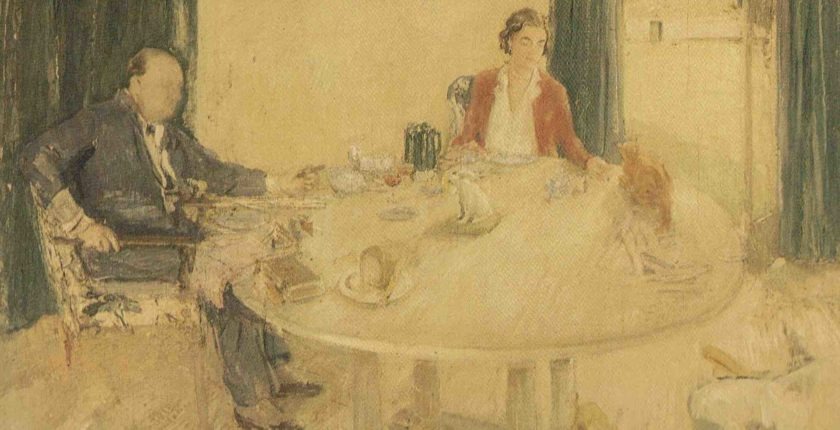 Above: Tea time with Clementine and “Tango” the cat (at table as usual), Chartwell, 1933, by Sir William Nicholson. Entitled “Study for Breakfast at Chartwell,” it is somewhat misleading, since this was not their routine: “Breakfast should be had in bed, alone,” Churchill quipped in 1946. “I don’t think our married life would have been nearly so happy if we both had dressed and come down for breakfast all these years.” (National Trust)

As the latest biographer of Winston Churchill, you must have uncovered many examples of how he dealt with the high stress of fighting and writing multiple wars and great perils to his country. How did he cope?

Britain’s Green Party is calling for a four-day week to fight stress, the new scourge of our times. Instead of damaging the economy in this way, I would propose the Winston Churchill Stress-Busting Technique. No one in British history was under greater stress than Churchill during the Second World War. Yet he kept totally calm however bad the situation got. This may be the answer to your question: a Churchill technique everyone might consider.

The first secret to his stress-busting was to have a happy and loving relationship. His marriage to Clementine was idyllic. She took care of all domestic and family aspects of life, allowing him to concentrate on winning the war. In June 1940 she told him to behave better towards his staff, which he did. She was his rock.

His next secret was not to get out of bed until noon, and to have two piping hot baths a day. He worked mornings sitting up in bed. He read every paper including the Evening Standard, then owned by one of his closest friends, Lord Beaverbrook, Minister of Aircraft Production in the early years of the war. He dictated letters to his secretaries in his pyjamas. He avoided the stress of being surrounded by colleagues until just before lunchtime.

Lunch would invariably begin with a couple of glasses of Pol Roger champagne. It would conclude with one or two glasses of Hine cognac. This was an invaluable stress-buster, especially when chased in between with very weak whisky-and-sodas. He was not an alcoholic, but he did drink a tremendous amount, having the constitution of an ox.

Another stress-buster were the 160,000 cigars that he smoked during his life. He didn’t inhale, but almost always had a cigar lit when out in public. He knew the power of the personal brand in politics. He avoided stress in the early afternoons by taking an hour-long nap, throughout the war. This extended the time he could stay up working until well into the early hours.

My colleague Richard Langworth tried to find out how long he could duplicate the Churchill lifestyle. After twenty-four hours his wife, Barbara, would not put up with it, whether or not his liver could stand it. Langworth calculated that it would take at least four full-time staff to facilitate it, a luxury perhaps not available to everyone.

The real reason Churchill was so calm during the war, however, was his innate sense of personal destiny. When was a schoolboy he said to a friend: “I tell you I shall be in command of the defences of London and I shall save London and England from disaster.” Far better than adopting the Green Party’s economically suicidal plans to fight stress, I therefore recommend being happily married, reading the Evening Standard, drinking Pol Roger, taking naps, smoking cigars and having a profound sense of personal destiny.

Andrew Roberts is the author of Churchill: Walking with Destiny. His previous works include Masters and Commanders: How Four Titans Won the War in the West; Storm of War: A New History of the Second World War; and Napoleon: A Life. An earlier version of this article appeared in the Evening Standard, London, 5 October.