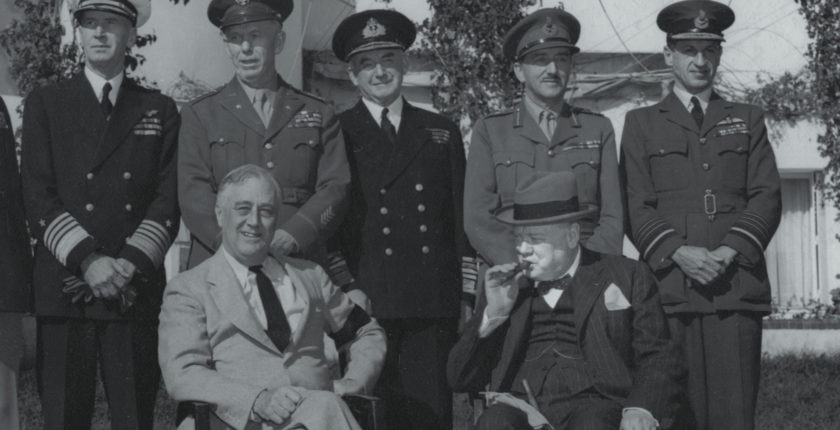 Lewis Lehrman is a banker, businessman and politician who in 1982 came within a hair of beating Mario Cuomo for governor of New York, no easy assignment for a Republican. His philanthropic work involves history in general and Abraham Lincoln in particular. As such he is particularly able to analyze and compare the threads of character and statesmanship of the West’s two great World War II leaders, and those around them.

Lehrman examines Churchill and Roosevelt through the teams they assembled: advisers, political officials and military leaders who worked for victory even as they argued over war strategy. His is not a history of the war, but an evaluation of people, decisions and events, a victory followed by a lost peace and decades of Cold War. A useful chronology and extensive endnotes, bibliography, and index are complemented by portrait photographs used as chapter headings, and two key appendices: a 1940 Roosevelt fireside chat, and Churchill’s victory speech in 1945.

The author does not ignore but draws insights from previous standard works on Churchill and Roosevelt: Warren Kimball’s Forged in War (1997), Jon Meacham’s Franklin and Winston (2004), Andrew Roberts’ Masters and Commanders (2008), Keith Sainsbury’s Churchill and Roosevelt at War (1994) and David Stafford’s Roosevelt & Churchill: Men of Secrets (2011). He particularly praises David Dilks’s Churchill and Company (2012), which described Churchill’s relationships with Commonwealth and European allies, and the works of Martin Gilbert and Richard Langworth. The book was written before Nigel Hamilton’s niggling yet prominent criticisms of Churchill in Commander in Chief: FDR’s Battle with Churchill, 1943 (2016), and it would be interesting to know what Lehrman makes of the arguments therein. (See Patrick Garrity’s review on this website.)

The essential background is well-known: Churchill as ardent suitor to Roosevelt the fickle mistress, and their shotgun wedding after Pearl Harbor. The honeymoon was short-lived, Lehrman writes. From 1943 Roosevelt increasingly bypassed the more realistic and pessimistic Churchill to court Stalin, whom Roosevelt vainly thought he could charm, leading to the broken promises of Yalta and, after Roosevelt’s death, the Cold War. Lehrman frankly quotes loyalist critics of both FDR and Churchill, while expressing his own opinions circumspectly. He contrasts Churchill’s forthright character and opportunistic thinking with Roosevelt’s more oblique style, what some saw as Roosevelt’s disorganized if not chaotic administration, to Churchill’s structured and well documented war direction. Lehrman believes Roosevelt was jealous of Churchill’s already great reputation, and spent time distrusting his ally which might have been better spent appraising Soviet ambitions.

Beyond the comparison of the two statesmen, the impact of Churchill, Roosevelt, and Company is its emphasis on the “Company”: those who worked for them under daily challenges. Here are their views, largely in their own words, from widely cited archival documents, especially diaries and letters. Churchill talked excessively and made decisions hastily, his colleagues complained; Roosevelt prevaricated and too often made no decisions at all. Lehrman is particularly interested in the role of presidential adviser Harry Hopkins, Roosevelt’s “listener in chief” and “herald,” whose close tie to Churchill was a transatlantic bridge holding the alliance together. Other American subjects for Lehrman’s pen are Roosevelt’s ill-suited 1938-40 ambassador Joseph Kennedy; his skilled diplomat Averell Harriman; his assistant treasury secretary (and Soviet spy) Henry Dexter White; his anglophobe admiral Ernest King; his master of planning George Marshall; and the supreme commander in Europe, Dwight Eisenhower.

Prominently quoted British leaders include Churchill’s foreign secretary (and later prime minister) Anthony Eden. A traditional diplomat and respected in the Tory Party, Eden viewed the Soviets as amoral and the Americans as exaggeratedly moral—at least over anything not involving their interests. Other important actors were Churchill’s crony, the press baron, production wizard and Second Front advocate, Lord Beaverbrook; and a definite non-crony, Lord Halifax, whom Churchill moved from the foreign office to the Embassy in Washington when the next vacancy occurred. On the military side we meet long-suffering Chief of Imperial General Staff Field Marshal Alan Brooke, tasked to make reality of Churchill’s ideas, many of which he was convinced were scattershot; and the beloved and loyal British military representative in Washington, Sir John Dill, one of the few non-Americans buried in Arlington National Cemetery. Lehrman sagely cites Warren Kimball’s observation that the Churchill-Roosevelt relationship was more than a façade but less than a personal friendship, as well as Keith Sainsbury’s view that it was not a myth but a useful half-truth.

This is a book to be read and contemplated: a well written, skillfully argued, wide ranging postmortem on the Second World War and the Anglo-American alliance.