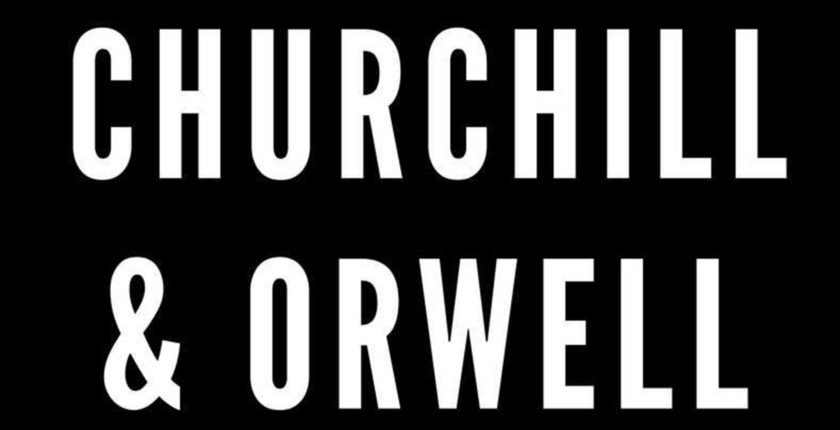 Although Winston Churchill and George Orwell never met or even corresponded, the American military historian Thomas Ricks has linked them in a book subtitled The Fight for Freedom. He fully accepts that they were “vastly dissimilar men, with very different life trajectories.” Churchill, the older by twenty-eight years, was much more robust, extroverted and oratorically fluent than Orwell, whom Ricks depicts as having a “phlegmatic and introverted personality.” It is true that Orwell named the hero of 1984 “Winston,” and that Churchill enjoyed the book so much he read it twice. But is that really enough of a connection to justify an entire book?

Perhaps surprisingly, the answer is yes because, as Ricks points out, both men’s “dominant priority, a commitment to human freedom, gave them common cause.” They didn’t need any personal interaction to be kindred spirits in the struggles against Hitler’s Nazism and Stalin’s Marxism-Leninism. “They responded with the same tools—their intellects, their confidence in their own judgments even when those judgments were rebuked by most of their contemporaries, and their extraordinary skill with words. And both steered by the core principles of liberal democracy: freedom of thought, speech, and association.”

Churchill and Orwell were both war correspondents, their prose styles partly conditioned by the urgent need to telegraph stories back from battlefields before being scooped by rivals. But it is very much in the political sphere that Ricks connects the two strangers—Churchill generally from the center-Right, Orwell from the Left—to make them what Simon Schama has called “the most unlikely of allies.”

While the linked and interacting sister-creeds so besmirched the 20th century—with Fascism killing fifty million people and Communism twice that number over a much longer period—Churchill and Orwell led the way politically and intellectually in defense of constitutional democracy. It is an inspiring story, well told.

On the day Britain declared war on Germany in September 1939, Churchill sought to define the struggle as far removed from the mere territorial issues of Poland, and German aggression in Eastern Europe. “It is a war, viewed in its inherent quality,” he told the House of Commons, “to establish, on impregnable rocks, the rights of the individual, and it is a war to establish and revive the stature of man.”

Only two years later, in 1941, Orwell echoed much the same sentiment, albeit without the late-Victorian Churchillian oratorical panache, when he wrote: “We live in an age in which the autonomous individual is ceasing to exist.” This fear, that totalitarianism might extinguish human autonomy, linked Churchill and Orwell closely and fully justifies Ricks’s short and highly readable book.

Andrew Roberts is the author of Masters and Commanders: How Four Titans Won the War in the West and Storm of War: A New History of the Second World War. His latest work, Napoleon: A Life. He is now writing a new biography of Winston Churchill. This review first appeared in the Evening Standard, and is republished with slight revisions by kind permission.

A Gentle Tribute: Orwell on Churchill

Included in Thomas Ricks’s book (234) is an appreciation of Churchill which Orwell wrote on his deathbed—the last piece of his to be published. He was reviewing Churchill’s second volume of war memoirs, Their Finest Hour:

“The political reminiscences he has published…have always been a great deal above the average, in frankness as well as literary quality….His writings are more like those of a human being than of a public figure….and whether or not 1940 was anyone else’s finest hour, it was certainly Churchill’s….One has to admire in him not only his courage but also a certain largeness and geniality which comes out even in formal memoirs of this type….The British people have generally rejected his policies, but they have always had a liking for him, as one can see from the tone of the stories told about him….At the time of the Dunkirk evacuation, for instance, it was rumoured that what he actually said, when recording his [House of Commons] speech for broadcast, was: ‘We will fight on the beaches, we will fight in the streets…we’ll throw bottles at the bastards; it’s about all we’ve got left!’ One may assume that this story is untrue, but at the time it was felt that it ought to be true. It was a fitting tribute from ordinary people to the tough and humorous old man whom they would not accept as a peacetime leader [in 1945] but whom in the moment of disaster they felt to be representative of themselves.”