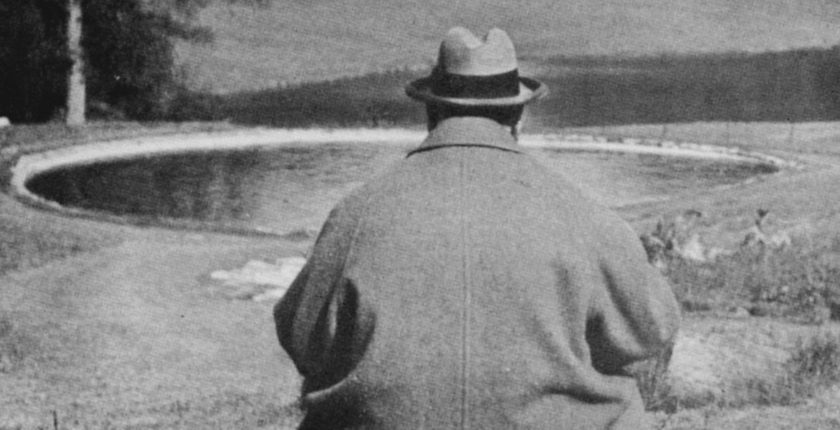 Part 3 “Cureless Folly Done and Said . . .”: Why Churchill was Downcast

What is the scene which unfolds before us tonight? It is cer­tainly not what we had hoped to find after all our ene­mies had sur­ren­dered uncon­di­tion­ally and the great world instru­ment of the United Nations had been set up to make sure that the wars were ended. It is cer­tainly not that. Peace does not sit untrou­bled in her vine­yard.1

Toward the end of his life, the old lion who had had implored, “never despair,” was him­self gripped by melan­choly. His despon­dence has been noted in vary­ing degrees by crit­ics and cham­pi­ons, his­to­ri­ans and psychoanalysts, fam­ily and con­tem­po­raries. What was at the root of it?

For twenty years begin­ning 1983 I had the priv­i­lege of sev­eral long vis­its with Sir Anthony Mon­tague Browne,2 Churchill’s last pri­vate sec­re­tary, and we often pon­dered Sir Winston’s late-life despon­dency. “He’d made a deep study of his­tory, and he had an extreme sen­si­tiv­ity to the winds and cross­cur­rents of world sit­u­a­tions,” Anthony reflected …

… I think that towards the end of his life this prophetic power was an unhap­pi­ness to him. He saw all too clearly what was hap­pen­ing to the civilised world, and to the stern val­ues that stand out so clearly in his life’s work. . . . He used to quote this sad verse of Hous­man’s: ‘Cure­less folly done and said, and the lovely way that led, to the slime pit and the mire, and the ever­last­ing fire.’3

I tried to rally him. I spoke of the extra­or­di­nary life he had enjoyed, cul­mi­nat­ing in the fact that at the end, with all he had said and done, he was almost uni­ver­sally pop­u­lar and admired. When he went to make the Charle­magne Prize speech in Ger­many in 1956, as he drove through the streets of Aachen and Bonn, he was cheered. It aston­ished him. After all, it was not very long after the end of the war. I referred to his Nobel Prize in Lit­er­a­ture, the vast scope of his activ­i­ties. How, I con­cluded, could he be so down­cast, when he had achieved so much?

I noted his reply ver­ba­tim, and he said the same thing on other occa­sions: ‘Yes, I worked very hard all my life, and I have achieved a great deal—in the end to achieve nothing.’

As we talked I offered Anthony two rea­sons, from a per­spec­tive much infe­rior to his, why I thought Churchill took this view. The first was the real­iza­tion, prob­a­bly as early as the Teheran Con­fer­ence, that he had fought down one mon­ster only to cre­ate another, and that the set­tled peace he had striven for had never mate­ri­al­ized. The sec­ond was the con­tin­ued inabil­ity of the English-Speaking Peo­ples to forge the close rela­tion­ship on which he had placed so much hope.

Anthony’s reply came in a speech he made at a din­ner in his honor in 1985:

I think that is a very inci­sive view. I do indeed believe that the lack of true coop­er­a­tion between the three great pow­ers had been a ter­ri­ble and increas­ing dis­ap­point­ment to him, going back as far as Teheran and Yalta. I was not with him at that time, but this is cer­tainly the impres­sion he gave me in his later years. I do not think in his heart of hearts that he ever expected any­thing very dif­fer­ent from the Soviet Union, though he had hopes—dismally unfulfilled—of a change of heart after vic­tory. But the eupho­ria of the early rela­tion­ship with Pres­i­dent Roo­sevelt dur­ing the first years of the war was grad­u­ally to die away, as the Amer­i­can admin­is­tra­tion believed that it could do busi­ness with “Uncle Joe.” Some business.

The so-called “spe­cial rela­tion­ship” with the United States was largely of British mak­ing, and some­thing of an illu­sion even from the very start. It was not for noth­ing that Win­ston Churchill called the last vol­ume of his war mem­oirs Tri­umph and Tragedy.

I have the great­est respect for Anthony Montague Browne’s opin­ions from so unique a van­tage point, and I have quoted these words often. But in con­sid­er­ing Churchill’s views on the great issues of peace and war, it is always appro­pri­ate to have his thoughts on record.

1 Churchill on 14 Jan­u­ary 1954, Chateau Lau­rier, Ottawa
2 Sir Anthony Mon­tague Browne KCMG CBE DFC (1923-2013) was an RAF fighter pilot and a diplo­mat who gave up a promis­ing For­eign Office career to serve as Churchill’s pri­vate sec­re­tary from 1952 to 1965. His essen­tial and poignant mem­oir, Long Sun­set, is avail­able in var­i­ous for­mats from Amazon.
3 For the full text of Housman’s poem, click here.