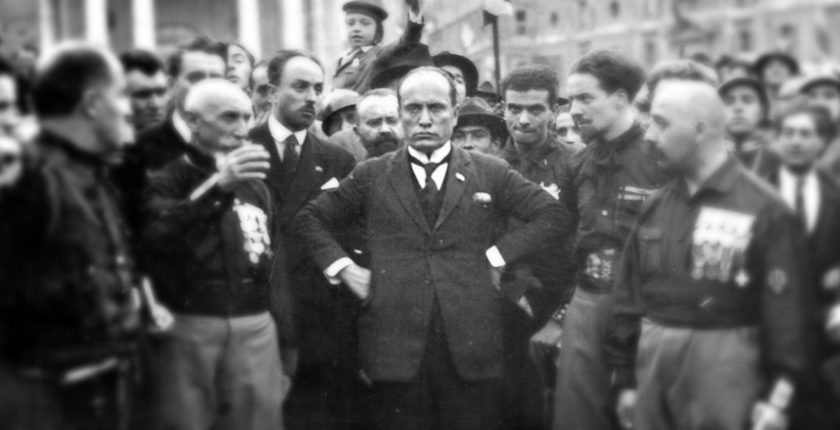 Before the war, Churchill offered Il Duce a deal. After the war, British intelligence tried to destroy their correspondence…. When Churchill became prime minister in May 1940 he tried, in a series of let­ters, to dissuade Mussolini from joining the Axis powers. He was ignored. Three weeks later Italy joined Nazi Germany and declared war on Great Britain. Although there would have been copies in London of the Churchill-Mussolini exchanges, none has ever turned up and in April 1945, somebody in London was very anxious that Mussolini’s copies should never see the light of day.

Of course there were at least three faked letters, published in the past, and referred to by conspiracy books. One of the more recent, Il carteggio Churchill-Mussolini alla luce del processo Guareschi (2010), was exploded by reviewer Patrizio Giangreco, who illustrated the alleged Churchill letters. Complete with inauthentic letterheads and fake signatures, they are almost laughable in their amateurishness.2

The Daily Beast states that Churchill, en route to Lake Como for a painting holiday in September 1945, stopped in Milan to stand bareheaded at Mussolini’s unmarked grave. No evidence is offered, nor does it seem likely: Churchill flew from London September 2nd and arrived at Como the same day3—but I’m sure the conspiracists would claim that his vigil at Il Duce’s grave was “covered up.”

Churchill is said to have flown to Milan under the cover name “Colonel Warden,” which the Daily Beast suggests was his pilot’s name. In fact, Churchill had used “Warden” as a codename for himself and his family (“Mary Warden”) since early in the war. It likely stemmed from his 1941 appointment as Lord Warden of the Cinque Ports.4

Churchill, we are then told, arrives at his villa on Lake Como, “owned by none other than Guido Done­gani…an industrialist and Fascist collaborator,” who was “interrogated by British intelligence and later released.” Churchill meets with Donegani, who apparently hands him the incriminating letters, papers or diaries—they are variously described.

The author adds that he enlisted offi­cial biog­ra­pher Mar­tin Gilbert to authen­ti­cate the diaries, letters, or whatever they were: “Gilbert, the historian, concluded that the correspondence had been retrieved and handed over to Churchill but it never turned up in the Churchill archives and was never seen again.”

This is pass­ing strange, since Sir Mar­tin Gilbert dis­missed the idea of secret Churchill-Mus­so correspondence, and nothing in his writ­ings sug­gests Done­gani met with Churchill. Writing to his wife the day after he arrived at Como, Churchill says the villa belonged to “one of Mussolini’s rich commercants who had fled, whither is not known.”5 (Again, the conspiracists would probably say this was a smokescreen.)

The so-called Mussolini Diaries are labeled “Fake” in the article’s title, so one must suppose there is no argument. There are a confusing number of references to various people who tried to peddle them, including one who ran away when hailed at an airport. An Interpol agent who investigated the story is quoted as saying Italians “needed people to believe that the diaries were forged” because otherwise “they would encourage a revival of the Mussolini cult and Fascism.”

How those faked 1940 letters, or other documents from 1945, would, if genuine, have revived Fascism is difficult to understand. Perhaps the best rejoinder is that of the historian Andrew Roberts:

Leaving aside the fact that Churchill would not by that stage have wanted or needed peace with Mussolini, one charge goes that the relevant doc­u­ments are in a waterproof bag at the bottom of Lake Como. So, when one takes issue with them, the conspiracy theorists say, “go and look.” Of course, if you don’t find anything, they just say, “you haven’t looked hard enough.”6