A Cornucopia of Anecdotes about the Songs Churchill Loved 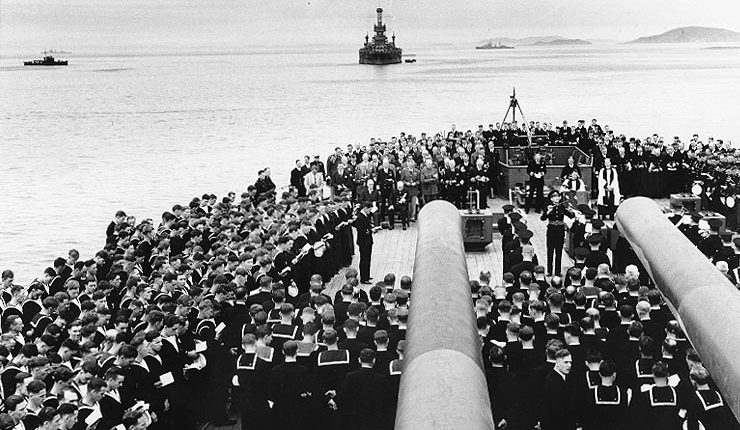 Featured Image: HMS Prince of Wales, Argentia, 10 August 1941: The President and Prime Minister are seated together just left of the lefthand gun barrel. “I chose the hymns myself….Every word seemed to stir the heart. It was a great hour to live.” —WSC 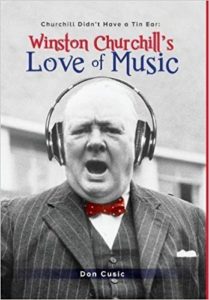 Confronted with Churchill’s History of the English-Speaking Peoples, Lord Attlee quipped that it should have been entitled Things in History which Interest Me. This book could be called Things of Interest about Churchill and Music. A cornucopia of anecdotes and lyrics, it offers a series of musical encounters, set within famous events. In so few pages it cannot be comprehensive, and in places it digresses down tangential alleyways. (There is a five-page biography of  Irving Berlin, a three-page account of British Music, a mini-history of the phonograph.) But Mr. Cusic has a good instinct for his theme, and his sends the reader searching to learn more. The author helps with compendious footnotes and a select bibliography.

There are two clangers in the first three sentences, further errors throughout, and a few odd phrases: “The songs performed in Music Halls were written by songwriters.…” Various typos creep in (“U.A.” for “U.S.A.”), suggesting the need for better editing. The eye of a well-read Churchillian might have prevented the misquote of a very funny yelp by 13-year-old Winston. When a man hissed a sketch of his father, the boy shouted: “Stop that row, you snub-nosed Radical!” The famous French crack that Britain would have her “neck wrung like a chicken” by Hitler is bowdlerized. But this is not supposed to be a compendium of historical fact, so don’t hold little errors against it.

The text traces Churchill’s life and career, tracking every reference the author found to music and song. We range from the marches, ditties and Gilbert & Sullivan Churchill loved to the powerfully inspirational. Which lyrics are presented is purely arbitrary, but once chosen, we get every word. Churchill’s youthful encounters with the ’cello and piano are duly noted. Several authorities attest to the fact that he was himself a terrible if enthusiastic singer (and dancer!). But the chief value of the book is motivational. The author’s ideas and assertions lead readers to search for more information or the songs themselves (click on links below).

“A Great Hour to Live”

Cusic includes all verses of the three hymns Churchill selected for Sunday services, on HMS Prince of Wales, during his meeting with Roosevelt in August 1941. In Their Finest Hour, Churchill wrote: “I chose the hymns myself: ‘For Those in Peril on the Sea’ and ‘Onward, Christian Soldiers.’ We ended with ‘O God, Our Help in Ages Past,’ which Macaulay reminds us the Ironsides had chanted as they bore John Hampden’s body to the grave. Every word seemed to stir the heart. It was a great hour to live. Nearly half those who sang were soon to die.” (The battleship was sunk by Japanese aircraft four months later.)

A minor fault is mistaking Clementine Churchill’s cherished love song, “In the Gloaming,” written in 1877 by Annie Fortescue Harrison and Meta Orred, for Harry Lauder’s rousing bar room ditty, “Roamin’ in the Gloamin’.” An easy mistake to make, because, as Cusic writes, Churchill deemed Lauder a “grand old minstrel,” and probably knew both tunes. (N.B.: Links above are to YouTube. Mr. Cusic might have provided them, so readers could dial up the actual tunes Churchill loved. Of course, you can Google them easily enough.)

Churchill’s visits to his old school, Harrow, are nicely described, and a few Harrow Songs provided. In all, four Harrow songs contain five verses added for Churchill. The author includes two, the first added in 1941 to “Stet Fortuna Domus”. The author explains that “sterner” in line 1 was Churchill’s substitute for “darker.” These were not dark days, he told the boys, but “the greatest days our country has ever lived.” Thus the verse:

Nor less we praise in sterner days
The leader of our nation,
And CHURCHILL’S name shall win acclaim
From each new generation.
For you have power in danger’s hour
Our freedom to defend, Sir,
Though long the fight, we know the right
Will triumph in the end, Sir.

Two Churchill verses were added to the majestic school song “Forty Years On.” They marked Sir Winston’s 80th and 90th birthdays in 1954 and 1964. Unfortunately, the book omits the 1954 verse, and YouTube versions do not contain either, but you can quickly catch the melody:

Sixty years on, though in time growing older,
Younger at heart you return to the Hill.
You who in days of defeat ever bolder.
Led us to Victory, serve Britain still.
Still there are bases to guard or beleaguer,
Still must the battle for Freedom be won:
Long may you fight. Sir, who fearless and eager
Look back to-day more than sixty years on.

Blazoned in honour! For each generation
You kindled courage to stand and to stay;
You led our fathers to fight for the nation,
Called “Follow up” and yourself showed the way.
We who were born in the calm after thunder
Cherish our freedom to think and to do;
If in our turn we forgetfully wonder,
Yet we’ll remember we owe it to you.

The Churchill verses are sung only once a year. at Harrow’s special Churchill Songs. Being there on that occasion is also a great hour to live.