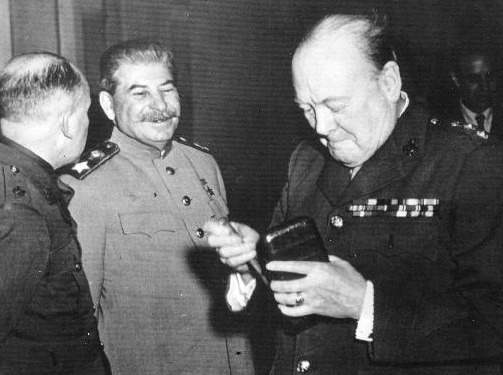 There seems to be a new trend in publishing: serious books in a format once the preserve of books for young people. Last year we had Cate Ludlow’s attractive I Love Winston Churchill: 400 Fantastic Facts. Now, at the same keen price, we have this title by Richard Wiles in a series which already offers “graphic biographies” of Jane Austen, Cézanne, Leonardo and Shakespeare. 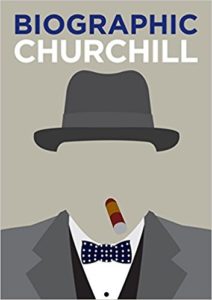 There are no photographs: The “graphic” aspect rests on color sketches, drawings, silhouettes, maps, tables and time-lines. The author is no Churchill historian, but he has evidently done a lot of research. Happily, most assertions are accurate. Some common errors are unfortunately present, however.

The Ulster Constabulary or Black and Tans are described as “Churchill’s brainchild” [57]. I was nonplussed to read that Churchill drank his champagne “invariably out of a silver tankard” [38]. He also drank claret, but never “mixed with soda” [39]! Also, there seems to be a confusion over his occasional martini. Wiles says this was “neat gin poured over ice, with a nod towards occupied France” [39]. But vermouth is Italian. “The final drink of the day—a fine port or a 90-year-old brandy,” we read, was taken around 10 pm. Then Churchill works another four hours…. [39]. This runs against all testimonies, since the four hours were rarely “dry.” A list of places the PM visited during WW2 includes “Argentina”—Wiles probably means Argentia, Newfoundland, where WSC met Roosevelt in August 1941. Finally, in 1946, he was not yet “Sir Winston” [82].

Some remarks are open to dispute: Winston’s father is said to have been “respected for his political wisdom….” [72]. One is surprised to see the author speak of Churchill’s “dogmatism” [72]—Churchill is generally associated with pragmatism. He used painting and bricklaying served to defuse his stresses [44]. On page 49, he is seen painting with his left hand—the image has been printed backwards.

These are, after all, minor slips, considering the booklet’s useful, accurate and in some cases entertaining information. The timeline, “A Career in Politics” [30-31], is faultless, and convenient with its parallel columns: “Churchill’s Political Offices” and “British Governing Party.” The reader sees how often Churchill was with the winning party or coalition, and how short were his periods in the “wilderness.” An excellent two-page spread on the Battle of Britain [66-67] shows how close was the numerical difference in aircraft and losses between the two sides.

Among the entertaining sections is “Clothes Maketh the Man” [50-51], complete with a color sketch of Churchill’s pink silk drawers. “The Trouble with Winston,” listing his injuries and illnesses in a light vein [32-33], is well done. It’s better than “The Teeth that Helped Win the War” [42], devoted to his lisp and his dentures. The inevitable cigar pages [46-47] show that he was averaged 70 a week—not much compared to Freud’s 140.

The “graphic” concept works well on the 1911 Siege of Sidney Street. There is a double-page report of the incident, with comments on the “influx from Russia” from the government’s liberal immigration policy—nothing new under the sun. Intriguingly, the Mauser C96 pistol used by Sidney Street anarchists was the same model Churchill used in the Sudan in 1898.

Wiles omits popular “canards” and “red herrings” indefatigably denounced by Richard Langworth and the Hillsdale Churchill Project. We have no myths about shootings in Tonypandy or Lord Randolph’s syphilis, nothing on Churchill allowing Coventry to be bombed. There are no apocryphal witticisms. Unusually, we are spared the unsubstantiated Navy announcement “Winston is Back,” in September 1939. Churchill also gets fair treatment over the Dardanelles, though I feared the worst since that section is entitled “Churchill’s Folly” [60-61].

All in all, this is a most attractive booklet, full of intriguing tidbits of admittedly unimportant information I had never seen elsewhere. This does not mean that it is devoid of serious facts and figures, which are also plentiful. It is an ideal present for a Churchillian. It is also useful for libraries keen to attract a changing public. In the digital age, too many readers ignore conventional books.

Antoine Capet, FRHistS, is Professor Emeritus of British Studies at University of Rouen, France. His review is also published in French in the University’s review Cercles.