The Churchill Project - Hillsdale College > Articles > Books > 2018 > “Churchill at the Gallop: Winston’s Life in the Saddle,” by Brough Scott

“Churchill at the Gallop: Winston’s Life in the Saddle,” by Brough Scott 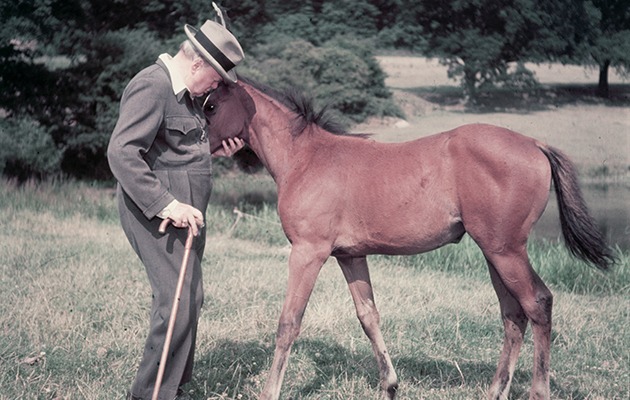 WSC with a thoroughbred colt, photographed for Life magazine, 1950s.

WSC with a thoroughbred colt, photographed for Life magazine, 1950s.

This book is a delightful, educational and luxurious production for such a modest price. Printed on thick, coated paper with many illustrations, it weighs over two pounds. The only technical complaint is that, with lots of white space available, the type could be larger.

Brough Scott, a horse racing journalist and former jockey, is ideal for the subject. He is the grandson and biographer of Churchill’s lifelong friend Jack Seely, later Lord Mottistone (1868-1947). In March 1918, “Galloping Jack” led Canadians in one of the last great cavalry charges, at Moreuil Wood. (That was two decades after Omdurman, which is usually and wrongly cited as the finale.)

Of the charge at Omdurman we are quickly reminded. Scott makes the first of many penetrating observations on page 1. “Think about it,” he asks:

It is actually pretty difficult to do, and that’s if the horse is standing still. Without taking your left hand off the reins, you have to raise your cavalry sword in your right hand across in front of you, and resheath it in the scabbard attached to the near side of the saddle. At 8.40 on a steamy hot morning in the Sudan on 2 September 1898, Winston Churchill did it at a gallop…. To keep his seat as he and his horse crashed into, down and through the seething, hacking throng in that dried river bed where the main body of the enemy were concealed, took riding skills and dexterity with a pistol almost off the scale. 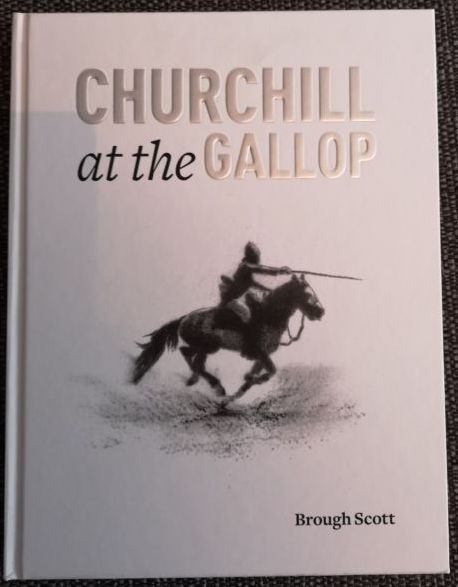 Such feats encouraged Scott to learn more about Churchill’s remarkable experiences with horses: “He rode more extensively than any British Prime Minister before or since. Maybe we shouldn’t be surprised. Winston Churchill was born a full twenty years before the first car was driven on a British highway…” He goes on that way for 230 pages, with fresh observations that cause graduate Churchillians to wonder: “why didn’t I think of that?”

Take Scott’s analysis of young Winston’s letters to his mother to finance “the greatest of my pleasures” at Sandhurst. One letter “may have included the programme for [a race meeting]…but it did not start with saddle talk. It began with acute observations abut the Sino-Japanese war over Korea…. ‘I take the greatest interest in the fleets and armies,’ he wrote.” Even as a spindly Sandhurst cadet, his interests were global.

The photos of WSC are mostly old chestnuts, but not all: there are charming post-World War II riding scenes with his daughter Mary. Scott’s “supporting” images include color prints of people and events, and the occasional surprise. (Did you ever see a carriage pulled by a team of zebras?) Scott chooses well. A photo of Hadendoa tribesmen, who fought for the Mahdi at Omdurman, dramatically conveys the valor that won Churchill’s respect in his book, The River War.

Most of the sixteen chapters begin with arresting illustrations. A cartoon depicts the startled young Winston in Ireland on his donkey, confronting what he thought were Fenians. A chapter on Cuba begins with sketches of the Spanish column Churchill joined, which illustrated his despatches for The Daily Graphic. Thus we proceed through Churchill’s life, Scott drawing out horse references from his writings and those of specialist historians, like Hal Klepak on the Cuban adventure.

Churchill’s campaigns in India, the Sudan and South Africa are beautifully laid out with contemporary photos, maps and plans. Before and after the Great War, his pursuit of polo is adequately documented. The emphasis is always equestrian, but these are as good accounts as you can read anywhere. Thus the book delivers much more than its cover promises.

Churchill was in his fifties before he played his last polo game, and was riding to hounds in his seventies. Of course, as he aged, his time in the saddle diminished. Scott covers his later years in fifty pages, not omitting his experiences as a thoroughbred race horse owner. The author’s facility for drawing out a telling conclusion remains intact. Discussing horses and racing in The Dream (his fictional conversation with his deceased father, 1947), Scott writes:

Winston’s parenting may have been unorthodox, not to say dysfunctional, by today’s standard, but there is no doubt that Jennie and Randolph left the deepest of impressions, and who is to say that he wasn’t reaching towards them in his diversions? He had long found precious solace in the painting at which his mother had so excelled, and now, in old age, he was about to re-register the chocolate-and-pink racing silks in which L’Abbesse De Jouarre [his father’s thoroughbred] had won the Oaks all those years ago.

Dear Martin Gilbert warned us all never to say “perhaps.” He would always retort, “Perhaps not!” Scott avoids that, but puts his conjecture in a way Sir Martin might let pass. Who indeed is to say his thought doesn’t fit? It seems to fit very well.

One wouldn’t expect it in a horse book, but Scott even manages to answer one of our most frequent questions, about WSC’s weight, at least in 1954. His wife had tried to put him on a diet, and Sir Winston was resisting. His scale read 14 1/2 stone (203 pounds), he wrote her, compared to 15 stone (210) on hers. “…if your machine is proved to be wrong you will have to review your conclusions, and I hope to abandon your regime. I have no grievances against a tomato, but I think one should eat other things as well.”