“Churchill on Europe” – by Felix Klos 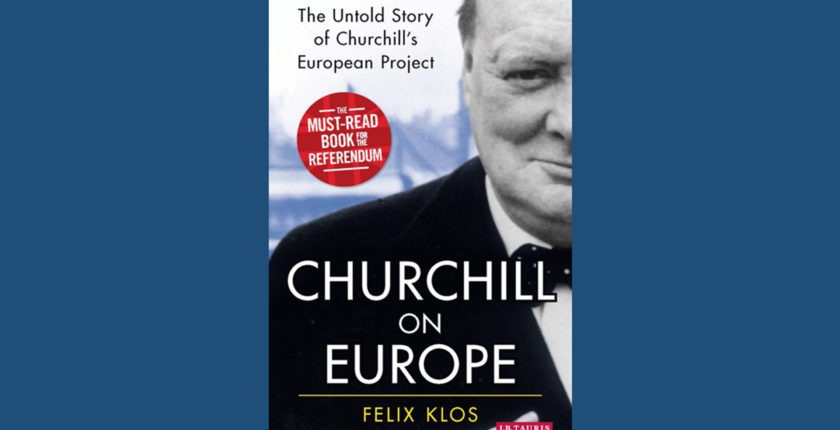 There is a fascinating book to be written about Winston Churchill’s relationship with the concept of a United Europe. Unfortunately, for all its hype, Felix Klos has written only the first part of it, and not, in fact, the most important part either.

The left-wing British paper The Guardian described this book as “showing very persuasively how Churchill supported a postwar union of European states and wanted Britain to play a leading part in it.” The first part of that is true, the second part utterly false—unless they mean “leading part” in the sense Churchill saw himself as a “flying buttress” of the Church: “I support it from the outside.”

Usually when publishers prominently display “The Untold Story” of something on the front cover of a book they mean to suggest to the buyer that the true story will be told inside. At least they can’t be blamed for misleading readers, since they have indeed published “the untold story.”

The Dutch-American political scientist’s very competent short analysis takes Churchill up to 1949, leaving the reader believing that Churchill was about to bring Britain into a united Europe at first opportunity. It does not bother to cover his 1951-55 postwar premiership at all, when the prime minister studiously prevented anything like that from happening.

In a sense Klos was unfortunate with his timing of his publication, because it was bound to be wrapped up in the fierce historical controversy surrounding Churchill’s attitude towards Europe, sparked by Britain’s 23 June 2016 referendum on her membership of the European Union (EU): the “Brexit” debate. His publishers have printed “The Must Read Book for the Referendum” in a big red circle on the front cover, and state in the blurb: “On 23 June this book asks us all to think carefully: what would Churchill have done?” Professor Andrew Knapp, a co-founder of a pressure group called Historians for Britain in Europe, endorses the book with the words “Brexiters take note!”

Full disclosure: I am myself a Brexiter, so I read the book eagerly looking for an explanation for why, having made so many inspiring speeches supporting the concept of European unity when in opposition in the second half of the 1940s, Churchill then, when back in government, prevented Britain from getting involved in the European Coal and Steel Community, the European Army, and all the other projects for unification in the first half of the 1950s. I was hoping Mr. Klos would explain these conundrums.

Yet Mr. Klos contents himself with simply ignoring the postwar premiership, merely inserting a short sermon at the end of the book entitled “The Referendum,” which states: “I am in no doubt that Churchill wanted an ever-closer union of European states. More than that, I argue, he wanted Britain to play a leading part.” So it can’t all be blamed on the publishers.

Some sentences, such as the one that starts, “Two years after he had resigned as national and party leader in 1957…” (when it was of course in 1955) suggest that the book was rushed out in time for the referendum, which is a shame. Yet for all its obvious political motivation, there is in fact nothing whatsoever in this entire 86-page book that would lead a reasonable person to conclude that for all his support of Franco-German reconciliation, Churchill ever wanted Great Britain to join a federalized Europe—let alone the kind of would-be superstate that the modern EU has become.

Indeed there are plenty of remarks Churchill made over a long career, which Mr. Klos does not see fit to quote, that imply that he would have found any diminution of Britain’s connections with the Commonwealth and United States inherent in such a political union utterly anathema to his whole political credo. A superb summation of these can be found on https://richardlangworth.com/eu.

If you want a perfectly scholarly recitation of Churchill’s relations with the United Europe movement in the late Forties, including his discussions with important Europhiles such as Count Coudenhove-Kalergi and others, then this is the book for you. It was part of Churchill’s essential magnanimity in victory—which many rightly see as the second most powerful aspect of his political personality after defiance in seeming defeat—to support the unification of a ravaged continent after the Second World War. That was both the most idealistic but also the most rational thing to do, after Germany had unleashed no fewer than five wars of aggression in the three-quarters of a century from 1864 to 1939. Yet to attempt to use this undoubted political fact to imply that today Churchill would have supported a bloated Brussels bureaucracy making 60% of British laws in the place of his beloved House of Commons is ludicrous. Sadly Mr. Klos has allowed his modern pro-EU politics to cloud his historical judgment, which is fatal in an historian.