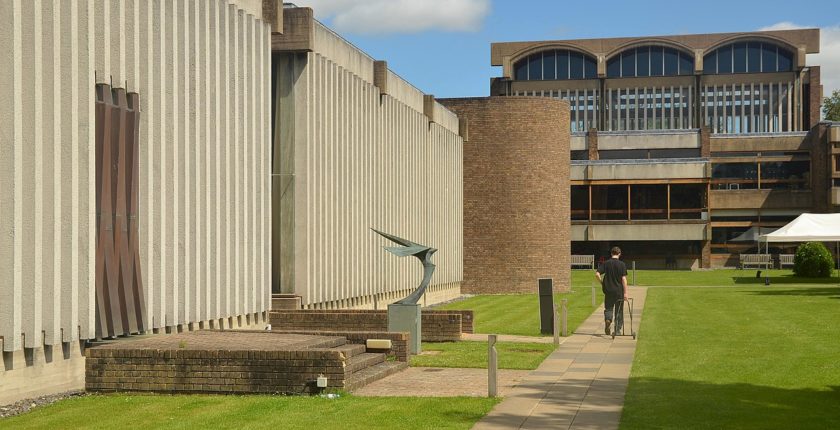 Churchill Archives and dining hall, Churchill College Cambridge. The College was built through a Trust organized in 1958 with Sir Winston as its chairman. (Cmglee, Creative Commons)

Dame Athene Donald, the Master of Churchill College Cambridge, is probably breathing a little easier today. Last week, a commission she appointed in reaction to the George Floyd killing was disbanded, or disbanded itself, depending upon whom one believes. That commission had arranged a panel at Churchill College about the racism of Winston Churchill.

The panel featured several rants on this theme that are entirely typical of our day. The charges were virtually undisputed by any of the panelists. This caused a reaction from Churchill’s descendants and from some historians, notably Churchill biographer Andrew Roberts, who knows the real story.

Dame Athene has not said a lot about the actual charges. She treats them as an episode in diplomacy: this faction and that faction got their say (except only one did), and we will continue to make sure that the faction currently fashionable will get a little more than its say. This is the startling thing about the whole episode: it misses the point.

Churchill College is an academic institution. Should it not be concerned with the truth of the things that were said? Those things are disputed now by competent people. The way to get to the bottom of them would be to arrange a debate.

A good debate would focus on the actual evidence of what happened in the past. In the case of Churchill, the record is more than ample to demonstrate what he thought about race. I have asserted many times and without being contradicted that Winston Churchill never said or implied that the rights of any person were conditioned upon the color of his or her skin. He said the opposite beautifully and often.

Yes, he thought some societies were not so arranged to be able to govern themselves fairly. That seemed an observable fact in, for example, India, where Untouchability and the Sati were an oppression upon the people, and where Hindus and Muslims were often at daggers drawn. Those first two evils are now, happily, long removed, and India is now, happily, a large and independent force for good. Moreover, India and Pakistan, where most of the Muslims went, may not be friends but they also are not fighting.

Churchill did not think those former practices in India a permanent disability. He was in favor, for example, of immediately building up “in the provinces of India organizations of local government which will be truly related to the populations they represent and seek to serve.” If successful, such a step would, he believed, allow for self-government in India to be achieved “with sureness and safety.”*

The world is tending to the condition described in George Orwell’s novel 1984. The past is changeable. The truth is what we say it is. The law of contradiction is repealed. Under the influence of these ideas, we trample the truth, and we tear down statues and remove dedicatory plaques almost without discrimination.

Churchill deserves a better hearing than this, especially from Churchill College Cambridge. That college is after all named for the man who helped, more than any other single man, to destroy the greatest racist in human history. One wonders, what have these contemporary academic scribblers contributed to human freedom and equality compared to that?

Dr. Arnn is the 12th president of Hillsdale College, where he is also a professor of politics and history. Under his aegis and editorship, Hillsdale College Press has completed the official biography and republished all previous volumes including 23 volumes of The Churchill Documents. He is the founder of the Hillsdale College Churchill Project and the author of Churchill’s Trial: Winston Churchill and the Salvation of Free Government (2015).