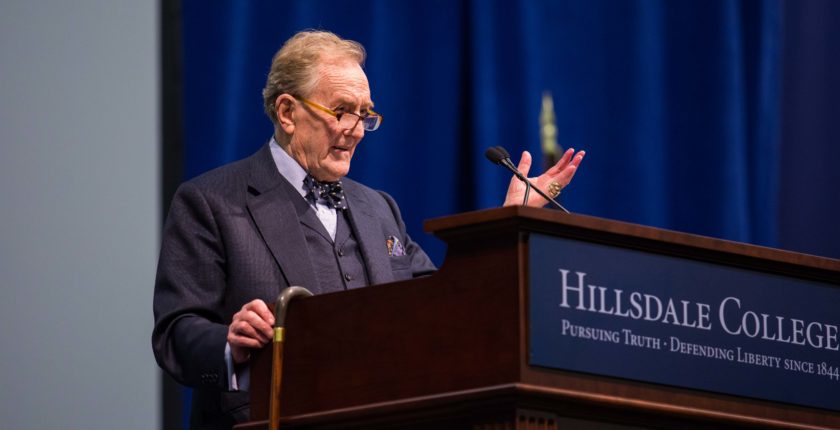 Defying the notion that Winston Churchill has little to say to us today, over 500 registrants and 200 students attended a Hillsdale College seminar on the celebrated statesman sponsored by Hillsdale’s Center for Constructive Alternatives and Churchill Project for the Study of Statesmanship.

Just turning 90 and as vivacious as ever, Robert Hardy, the greatest actor ever to play Winston Churchill, spoke on his experiences before a capacity audience, charming every one he met and enthralling our young people with his acting experiences, invoking legendary names of film and drama.

At lunch with the Churchill Fellows—graduate and undergraduate students working on upcoming volumes in the Churchill biography—Mr. Hardy recalled his days at Oxford, where he had the fortune to be tutored by C.S. Lewis and J.R.R. Tolkien. To their astonishment, he broke into a lengthy passage from the Canterbury Tales, flawlessly recited in Old English. One student remarked: “He’s a good argument for 90 as the new 70.”

Historian Andrew Roberts commenced proceedings October 4th with a discussion of “Churchill’s early life,” in which he overcame the obstacles of boarding school, the mysteries of Latin and Mathematics, and a distant father who never thought he’d amount to anything. Mr. Roberts, who is engaged on a new Churchill biography, offered droll accounts of Churchill’s early adventures.

After dinner, Minnie Churchill and Simon Bird of Churchill Heritage Ltd., which catalogues and licenses Sir Winston’s over 500 oil paintings, spoke on the great man’s “adventures with a paintbox,” showing many examples of his impressionistic, colorful oils, and explaining how painting provided a retreat and a solace in troubled times.

On Monday, after a luncheon dedication of the new Searle Centre, attendees viewed four excerpts from Robert Hardy’s famous documentary, “Winston Churchill: The Wilderness Years.” Brilliantly cast, they involved the rearmament debates of the 1930s, and the ineluctable slide to war. The last episode ends with Churchill’s return to the Admiralty, which he had quitted in pain and sorrow during World War I, twenty-five years earlier. Richard Langworth, senior fellow for The Churchill Project, introduced each episode by identifying the various characters and the roles they played in history.

After Monday’s dinner, our speaker was Robert Hardy himself, who recalled his efforts “climbing Everest,” as he described his role as Churchill: “In attempting to approximate the man who saved us all…I never reached the summit, but I think there were occasions when I was able somehow to gaze upwards toward the towering peaks.”

Tuesday featured three lectures on key aspects of Winston Churchill. Richard Langworth’s “Churchill and the Written Word” was an account of Churchill the writer: how he was able not only to comprehend and warn of the dangers of war and “Mass Effects in Modern Life,” but to write about them with verve and spirit that makes his books so readable, his advice so timely still.

Professor John Maurer of the Naval War College in Newport, Rhode Island, gave a scintillating talk on “Churchill as War Leader,” emphasizing the key episodes where Churchill alone kept Britain in the fight in 1940, thereby enabling her to avoid abject accommodation with the forces of tyranny. It was Professor Maurer’s thesis that no one else could have managed it. Indeed without Churchill, the alternative would probably have occurred—with what result we can only imagine.

Hillsdale President Larry Arnn completed the program with “Churchill in Peacetime,” a presentation based in part on his new book, Churchill’s Trial: Winston Churchill and the Salvation of Free Government. Though known widely as a man of war, Dr. Arnn explained, Churchill had feared modern war all his life, tried to prevent it, and, once war was inevitable, he strove to bring it to a speedy conclusion. Moreover, he abhorred socialism and the fatal affects of an all-powerful state.

“In every sphere of human endeavour,” Sir Martin Gilbert wrote, “Churchill foresaw the dangers and potential for evil. Many of those dangers are our dangers today. He also pointed the way forward to our solutions for tomorrow. That is one reason why his life is worthy of our attention…for he was a man of quality: a good guide for our troubled decade and for the generations now reaching adulthood.”