“Churchill and the Generals” – by Mike Lepine 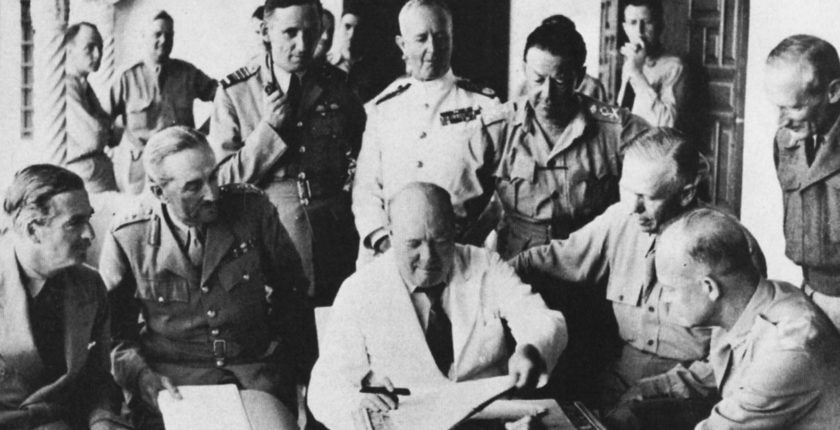 Churchill and the Generals, by Mike Lepine. Danann Publishing, 138 pages with two DVDs, $37.85.

As the former editor of the Aviation & Military Video Club, Mike Lepine has been instrumental in bringing much archival film footage to the public for the first time. As an author, he has written over thirty books. Here he considers Winston Churchill’s relationship with his generals during World War II. Accompanying the text is a fascinating array of color and black and white photographs.

As an introduction, Levine presents an illustrated WW2 chronology. He follows with an excellent in-depth biography of Churchill with photographs covering his life. There follow individual stories of various generals and their relations with the prime minister.

Prominent, of course is Sir Alan Brooke, later Viscount Alanbrooke, whose chapter is highlighted by color portraits and color and black and white photos. The Brooke-Churchill relationship was “complicated”; Levine tracks it from the beginning, in early 1940.

As the German army surrounded the British and French at Dunkirk in May 1940, Brooke was ordered off the beaches. By June 12th he was back in France to take command of the 150,000 British troops west of the Seine. In his first-ever conversation with Churchill, Brooke, certain that the French Army was defeated, recommended evacuating the British troops.

It was the beginning of many arguments: Churchill wanted the British hurled “splendidly” at the advancing Germans and accused Brooke of being timid. Brooke was on the verge of losing his temper (not for the last time), but after ninety minutes’ discussion, the PM gave in and the troops came home.

In December 1941, Brooke was appointed Chief of the Imperial General Staff. Now, Lepine writes, “the arguments were frequent and explosive. Brooke would look Churchill in the eye and say, ‘I flatly disagree’ and was known to break his pencil in half in sheer frustration. When Churchill had gone, Brooke even took to mimicking him behind his back to the delight of other senior officers. It was a true love-hate relationship for both men.”

Churchill’s memoirs, The Second World War, further infuriated Brooke. He believed Churchill wanted to give the impression that he had won the war and ignored the crucial role played by his generals. To set the record straight, Brooke published his secret wartime diaries in two volumes.

“Even in a strongly censored form,” writes Lepine, “the diaries were incendiary. His comments on working with Churchill were a revelation—but many of his other expressed views were sensational too.” The diaries were published in a heavily abridged and censored form in 1957 and 1959, and Churchill was greatly upset. Brooke’s full and uncensored text was released in 2001.

In contrast to Brooke, Lepine describes Churchill’s relationship with Major-General Sir Hastings Ismay as one of respect and admiration. In 1936, Ismay was promoted to deputy secretary of the Commission of Imperial Defence. In August 1938, he became secretary. Ismay continued to provide services to the government as late as 1963, when he was asked to review the organization of the military.

Lepine writes that Ismay first warned Churchill of General Bernard Montgomery’s “eccentricities.” Rather than delay making his acquaintance, Churchill met Monty for dinner at a Brighton hotel in summer 1940. Churchill was aghast when Montgomery refused alcohol: “Never touch the stuff. Don’t drink, don’t smoke—and I’m one hundred per cent fit!.” Churchill stared at the general in disbelief and said: “Well, I drink as much brandy as I can get and I smoke cigars and I’m two hundred per cent fit!” But soon Churchill was delighted at Monty’s victory at the Battle of El Alamein.

Lepine describes Field Marshal William Ironside, a towering six-feet-four, as “blunt, unskilled in diplomacy and, when aroused, a man with a ferocious temper.” His relationship with Churchill went bad in April 1940, when the Nazis invaded Norway. Ironside, commanding British troops there, “found it almost impossible to get things done, as the War Cabinet became confused and divided, mainly due to Churchill.” Ironside finally evacuated British forces from Norway.

Lepine also writes about Churchill and Generals Archibald Wavell, Claude Auchinleck, Harold Alexander, Sir John Dill, Henry Maitland Wilson, and two Americans, George Marshall and Dwight Eisenhower. While the up and down relations between Churchill and Marshall are well covered, it is disappointing that the piece on Eisenhower makes no reference to his relationship with Churchill—which was also complicated.

Endnotes and a bibliography would have enhanced this book’s value to readers, Churchill and the Generals is an admirable book. It presents the life story of each of the generals and discusses most of their interaction with the Prime Minister. With its outstanding collection of color and black and white photographs, it makes a good addition to the Churchill canon.