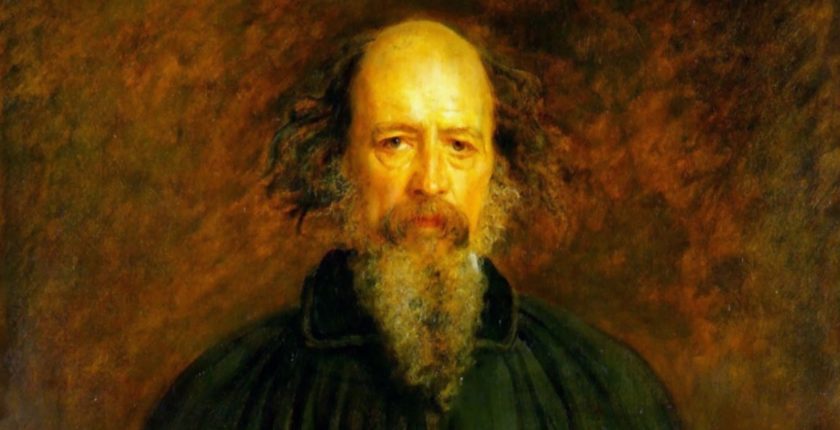 A reader has written to ask if Alfred, Lord Tennyson was Churchill’s favorite poet. We don’t know if Tennyson headed Churchill’s list, but he certainly ranked high.

In 1908, Churchill’s old Harrow head master, Bishop Welldon, gave him a set of Tennyson’s works as a wedding present. It appears that he began reading Tennyson in depth at around that time, as Violet Bonham-Carter recalls:1

WSC: “What is it you once called yourself—‘red in tooth and claw’? I like to see you plunge your claws—those delicate and rosy claws—into the vitals of a foe.”

Violet: “It wasn’t my phrase, it was Tennyson’s.”

WSC:  “Never read him. Should I like his books?”

Despite this, Churchill did have earlier acquaintance with the poet. He read “The Charge of the Light Brigade” as a boy, and memorized some famous Tennyson lines, possibly from books of quotations, in his massive self-education as a young cavalry lieutenant in India in 1895-97.

In his own books, it was not unusual for Churchill to reach into his amazing memory for a favorite passage or title by a great author. An example is his first chapter in Ian Hamilton’s March:2 A Roving Commission, which he later used as the subtitle (and American title) of his autobiography, My Early Life.3 This was the title of an 1899 novel by G.A. Henty, which Churchill had read as a young man. Likewise in Lord Randolph Churchill,4 Churchill leads a chapter with a line from Tennyson: “To strive, to seek, to find and not to yield….”

In 1926, Churchill inserted Tennyson’s patriotic poem “Soul of England” in the British Gazette during the General Strike. Eighteen years later, speaking in the Albert Hall on American Thanksgiving day, November 23, 1944, Tennyson was again on his mind: “‘Let the great world spin for ever down the ringing grooves of change.’ as Tennyson said many years ago.”

There is no doubt about Churchill’s favorite Tennyson lines, which come up again and again in his writings: the prophetic predictions of future wars in the poem “Locksley Hall.” Walter Graebner, his Life editor after World War II, recalled: “He had an incredible memory—one of the reasons for his genius—and if something reminded him of Tennyson it was nothing for him to recite a hundred lines or more of ‘Locksley Hall.’”

Churchill quoted “Locksley Hall” more often than any other words of Tennyson, alluding to it in conversations with Roosevelt and the allied military generals in World War II. But his favorite lines appeared in his essay “Fifty Years Hence,” published as a chapter in his book, Thoughts and Adventures:5

For I dipt into the future, far as human eye could see,
Saw the Vision of the world, and all the wonder that would be;
Saw the heavens fill with commerce, argosies of magic sails,
Pilots of the purple twilight, dropping down with costly bales;
Heard the heavens fill with shouting, and there rain’d a ghastly dew
From the nations’ airy navies grappling in the central blue;
Far along the world-wide whisper of the south-wind rushing warm
With the standards of the peoples plunging thro’ the thunderstorm;
Till the war-drum throbb’d no longer, and the battle-flags were furl’d
In the Parliament of man, the Federation of the world.
Slowly comes a hungry people, as a lion creeping nigher,
Glares at one that nods and winks behind a slowly-dying fire.

Recalling those lines again in “Nations on the Loose” (Colliers, 4 May 1935), Churchill wrote: “Many intellectuals believed that after the horrible carnage and desolation of the Great War the thoughts of mankind would turn irresistibly to internationalism….They hoped that Tennyson’s prophecy of the ‘Parliament of man, the Federation of the world’ would be fulfilled with the rest of his memorable predictions. But the time is not yet.”

Indeed: still not yet….

Churchill must have been well into Tennyson that year as he wrote about George V’s Silver Jubilee: “We exclaim with Tennyson: ‘O Statesmen, guard us, guard the eye, the soul / Of Europe, keep our noble England whole.’”6

Finally, at his famous 1949 “Mid-Century” speech at Massachusetts Institute of Technology, Churchill said: “Yea, even in this darkling hour I have faith that this process [Anglo-American collaboration] will go on. I rejoice in Tennyson’s celebrated lines: “Men, my brothers, men, the workers, ever reaping something new; That which they have done but earnest of the things that they shall do.”