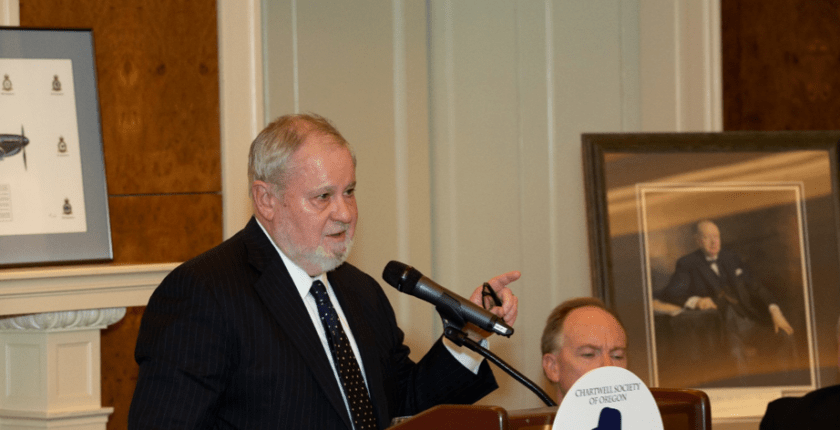 Every year the Chartwell Society of Oregon holds a banquet in celebration of Winston Churchill’s birthday. During the dinner, members and honored guests give toasts to George VI, Charles de Gaulle, Dwight Eisenhower, Franklin Roosevelt, and, of course, Winston Churchill. Hillsdale College President Dr. Larry P. Arnn gave the toast to Churchill for the twenty-seventh celebration, held on November 21, 2019. The following is adapted from his toast.

On May 13, 1940, the newly appointed Prime Minister Winston Churchill said in the House of Commons the famous words:

I would say to the House, as I said to those who have joined this government: “I have nothing to offer but blood, toil, tears and sweat.”

We have before us an ordeal of the most grievous kind. We have before us many, many long months of struggle and of suffering. You ask, what is our policy? I can say: It is to wage war, by sea, land and air, with all our might and with all the strength that God can give us; to wage war against a monstrous tyranny, never surpassed in the dark, lamentable catalogue of human crime. That is our policy. You ask, what is our aim? I can answer in one word: It is victory, victory at all costs, victory in spite of all terror, victory, however long and hard the road may be….1

Because Churchill was a fierce warrior on the battlefield, because he was both a leading statesman and soldier in the First World War, and because he won his glory in the Second World War, the greatest of all wars, it is hard to remember how he typically spoke of war.

In one of my favorite Churchill books, the River War, there is a remarkable paragraph from his chapter on the Battle of Omdurman in which Churchill describes the bravery and suffering of the Dervishes, with whose way of life he had no sympathy, but whose bravery he admired.

Eight hundred yards away a ragged line of men was coming on desperately, struggling forward in the face of the pitiless fire—white banners tossing and collapsing; white figures subsiding in dozens to the ground; little white puffs from their rifles, larger white puffs spreading in a row all along their front from the bursting shrapnel.2

[The infantry] fired steadily and stolidly, without hurry or excitement, for the enemy were far away and the officers careful. Besides, the soldiers were interested in the work and took great pains. But presently the mere physical act became tedious. The tiny figures seen over the slide of the back-sight seemed a little larger, but also fewer at each successive volley. The rifles grew hot—so hot that they had to be changed for those of the reserve companies. The Maxim guns exhausted all the water in their jackets, and several had to be refreshed from the water-bottles of the Cameron Highlanders before they could go on with their deadly work. The empty cartridge-cases, tinkling to the ground, formed a small but growing heap beside each man. And all the time out on the plain on the other side bullets were shearing through flesh, smashing and splintering bone; blood spouted from terrible wounds; valiant men were struggling on through a hell of whistling metal, exploding shells, and spurting dust—suffering, despairing, dying. Such was the first phase of the battle of Omdurman.3

The first is a description of brave men, the second a description of a factory. And the brave men had no hope. This battle took place in 1898 when Churchill was 24 years old. He had already the imagination to see what such things would mean for the future of war.

Churchill saw his fears of war appear in all their horror in the First World War. He wrote of it:

The Great War through which we have passed differed from all ancient wars in the immense power of the combatants and their fearful agencies of destruction, and from all modern wars in the utter ruthlessness with which it was fought. All the horrors of all the ages were brought together, and not only armies but whole populations were thrust into the midst of them. The mighty educated States involved conceived with reason that their very existence was at stake. Germany having let Hell loose kept well in the van of terror; but she was followed step by step by the desperate and ultimately avenging nations she had assailed. Every outrage against humanity or international law was repaid by reprisals often on a greater scale and of longer duration. No truce or parley mitigated the strife of the armies. The wounded died between the lines: the dead mouldered into the soil. Merchant ships and neutral ships and hospital ships were sunk on the seas and all on board left to their fate, or killed as they swam. Every effort was made to starve whole nations into submission without regard to age or sex. Cities and monuments were smashed by artillery. Bombs from the air were cast down indiscriminately. Poison gas in many forms stifled or seared the soldiers. Liquid fire was projected upon their bodies. Men fell from the air in flames, or were smothered, often slowly, in the dark recesses of the sea. The fighting strength of armies was limited only by the manhood of their countries. Europe and large parts of Asia and Africa became one vast battlefield on which after years of struggle not armies but nations broke and ran. When all was over, Torture and Cannibalism were the only two expedients that the civilized, scientific, Christian States had been able to deny themselves: and these were of doubtful utility.4

After that terrible war, Churchill thought deeply about what had happened and how to prevent it. In 1925 he wrote a remarkable essay entitled, “Shall We All Commit Suicide?” It contains this passage:

Mankind has never been in this position before. Without having improved appreciably in virtue or enjoying wiser guidance, it has got into its hands for the first time the tools by which it can unfailingly accomplish its own extermination. That is the point in human destinies to which all the glories and toils of men have at last led them. They would do well to pause and ponder upon their new responsibilities. Death stands at attention, obedient, expectant, ready to serve, ready to shear away the peoples en masse; ready, if called on, to pulverize, without hope of repair, what is left of civilization. He awaits only the word of command. He awaits it from a frail, bewildered being, long his victim, now—for one occasion only—his Master.5

The answer is that Churchill saw in Hitler, and also in Stalin, the culmination of the modern movement toward engineering everything in society with scientific tools under the scientific method.

The Prime Minister desires to see cordial relations between this country and Germany. There is no difficulty at all in having cordial relations with the German people. Our hearts go out to them. But . . . there can never be friendship between the British democracy and the Nazi Power, that Power which spurns Christian ethics, which cheers its onward course by a barbarous paganism, which vaunts the spirit of aggression and conquest, which derives strength and perverted pleasure from persecution, and uses, as we have seen, with pitiless brutality the threat of murderous force. That Power cannot ever be the trusted friend of the British democracy.6

The answer is that Churchill was not a general, but a statesman, a higher and more difficult thing to be. The job of the statesman is not to win glory in war, but to secure the chance for his people to live happy, fully human lives.

Churchill loved war. His spirit rose when it came. He fought on battlefields with a mixture of dash and calm courage. He directed wars in cabinet rooms with the moral courage and unflinching nerve that yields the best decisions.

But Churchill loved something else better than he loved war. He loved peace. He loved freedom. He loved governments that protected the rights of their people and operated only with their consent.

If we are men and women who love these things, and who are ready to fight for them if we must, then it is right for us to raise a glass to the mighty, eloquent, providential Winston Churchill.