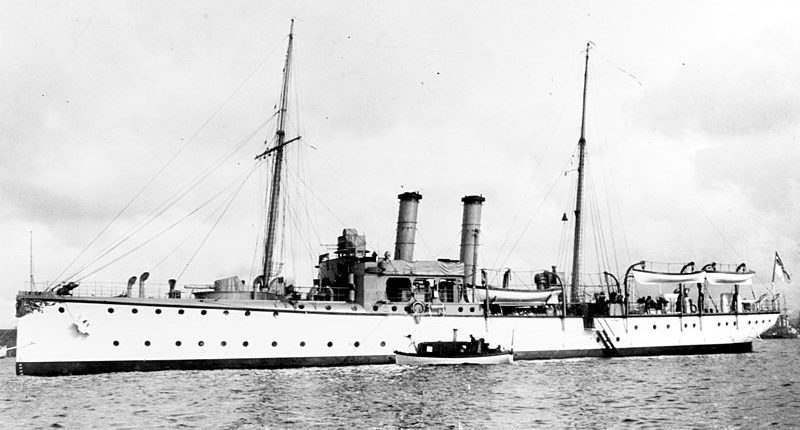 Germany's SMS Panther, which caused an uproar at Agadir in 1911

Above: On 1 July 1911, the German gunboat SMS Panther steamed into French Morocco, ostensibly to protect German interests against French expansionism, touching off the Agadir Crisis.

On the idle hill of summer,
Sleepy with the sound of streams,
Far I hear the steady drummer
Drumming like a noise in dreams.
Far and near and low and louder,
On the roads of earth go by,
Dear to friends and food for powder,
Soldiers marching, all to die.1

Churchill’s memoir of the First World War, The World Crisis, begins its third chapter with the famous verse by A.E. Housman. It kept running through his mind, he wrote during the 1911 Agadir Crisis. The “noise in dreams” was war in Europe.2

Until that point, Churchill had been optimistic about continued peace. But Germany’s action at Agadir convinced him that war was inevitable and that Britain must be prepared. In Churchill’s own writings, Agadir was the key event bringing him to realize that war was on the horizon.

As a young Liberal politician, Churchill’s showed relatively little concern for the possibility of war with Germany. As late as 17 October 1908, he declared in a speech before a miner’s demonstration in Swansea:

I think it is greatly to be deprecated that persons should try to spread the belief that war between Great Britain and Germany is inevitable. It is all nonsense. In the first place the alarmists have no ground whatever for their panic or fear. This country is an island… [I]n the second place there is no collision of primary interests, big or important interests, between Great Britain and Germany in any quarter of the globe.3

Consistent with this view, Churchill disagreed publicly with First Lord of the Admiralty Reginald McKenna.  Expanding the Royal Navy was McKenna’s goal in the 1908 Naval Estimates. Although committed to British naval supremacy, Churchill believed a smaller number of warships was adequate. The savings freed up resources that could be more effectively directed toward social reform.4

Churchill’s optimism was soon confronted with exactly the kind of collision of primary interests between Britain and Germany he had once discounted. In April 1911, a rebellion erupted in Fez against the Sultan of Morocco. The French government, which had colonial designs on Morocco, dispatched troops to put down the revolt. Germany also had African interests. France was establishing hegemony in Morocco; Berlin expected compensation. Adding action to words on 1 July 1911, the German gunboat SMS Panther steamed into the Moroccan port of Agadir. Ostensibly she was there to protect German trade interests.5 Several days later, she was replaced by the larger cruiser SMS Berlin. In exchange French intervention in Morocco, Germany demanded territorial concessions from the French Congo the the German Cameroons.

An international crisis seemed likely. In London, the British worried over the possibility of German naval bases on the Atlantic, within striking distance of Gibraltar.6 In The World Crisis, Churchill cites the central question for Britain: “Was Germany looking for a pretext of war with France, or was she merely trying by pressure and uncertainty to improve her colonial position?”7

Churchill’s description of Britain’s initial response to the German government on 5 July, in a letter to his wife, was blunt: “We decided to use pretty plain language to Germany and to tell her that if she thinks Morocco can be divided up without John Bull, she is jolly well mistaken.”8 By late July, Churchill’s opinion had further hardened. In an undated memorandum, he wrote, “If Germany makes war on France in the course of the discussion or deadlock (unless F[rance] has meanwhile after full warning from us taken unjustifiable ground) we sh[oul]d join with France. Germany should be told this now.”9

Ultimately France eased war threats with territorial concessions to the German Cameroons colony. The worry, however, remained. Looking back in 1917, Churchill saw Agadir as the event which convinced him of the imminence of war. In an undated note, he recalled:

It was through this Agadir crisis that I was drawn into the great tragedy wh[ich] was so steadily approaching. Up till then I had not believed in the possibilities of Armageddon, or that Great Britain w[oul]d in any case be drawn in. But during the crisis, & especially after L[loyd] G[eorge]’s speech at the Mansion House & the German Ambassador’s complaint about it, I realized how near we stood to the supreme event.10

This note read, “not for publication but as a guide,” and “End of chap. II & of chap. III.”11  At its end Churchill wrote: “This is only a note to give you the tone & key. Please don’t quote any of it.” It is not clear who “you” was, but it seems likely that these were early notes for The World Crisis, Volume I. Chapter II of that volume was entitled, “Milestones to Armageddon,”12 echoing the language in the note. Chapter III of Volume I describes Agadir.

Churchill at once returned to the Home Office and telephoned to the Admiralty. The Admiral in charge refused, however, to accept any responsibility, and declined to send a detachment of marines to guard these hitherto neglected but vital magazines. Accordingly, Churchill telephoned Lord Haldane at the War Office and persuaded him to send a company of infantry to each magazine….

In his mind’s eye—and this was one of his great attributes—Churchill had immediately conjured up during that garden party at No. 10, the possibility of a small group of Germans, possibly German agents in London, seizing this magazine, and destroying it….  there was no guard on vital munitions needed for the Fleet, and no sense of urgency among those responsible.14

Defending the magazines, wrote Randolph Churchill, “was the first of many actions which in a long life was to gain for Churchill the reputation in pussyfoot circles of being an alarmist.” But as Churchill wrote to the King a few days later: “These [magazines] are vital spots & it is high time to make absolutely sure of their safety.”15 Randolph Churchill added: “[WSC] always maintained that it was better to be alarmed before a catastrophe rather than after.”16 …. Churchill soon “emerged as a leading advocate of adequate defence.”17

“Military Aspects of the Continental Problem”

On 13 August, in preparation for a meeting of the Committee of Imperial Defence, Churchill drafted a memorandum outlining his expectations for what a war with Germany would look like if it materialized, assuming Britain, France, and Russia were in alliance.18 Entitled “Military Aspects of the Continental Problem,” it envisioned bringing British troops from the home front and India to aid the French. About 290,000 men, Churchill wrote, would arrive around forty days into the conflict. By then the German lines would extend to their limit.19 In 1914, the prescience of this timetable would be confirmed. The German advance ground to a halt around the River Meuse, almost exactly on the fortieth day.20

The Committee seems to have taken little notice at first of Churchill’s memorandum.21 General Sir Henry Wilson dismissed it as “ridiculous and fantastic.”22 But the Cabinet paid attention, and Churchill continued recommending plans for a general European war to the British administration. On 30 August he wrote to Foreign Minister Sir Edward Grey:

Propose to France and Russia triple alliance to safeguard (inter alia) the independence of Belgium, Holland and Denmark. Tell Belgium that, if her neutrality is violated, we are prepared to come to her aid and to make an alliance with France and Russia to guarantee her independence. Tell her that we will take whatever military steps will be most effective for that purpose…. If the French send cruisers to Mogador and Saffi, I am of opinion that we should (for our part) move our main fleet to the north of Scotland into its war station. Our interests are European, and not Moroccan.23

Two weeks later, on 13 September, Churchill wrote Prime Minister H.H. Asquith in criticism of the slowness with which the Admiralty had approached war preparations:

Are you sure that the Adm[iral]ty realise the serious situation of Europe? I am told they are nearly all on leave at the present time. After his revelations the other day, I cannot feel implicit confidence in [First Sea Lord Arthur] Wilson. No man of real power c[oul]d have answered so foolishly. The Adm[iralt]y have ample strength at their disposal. They have only to be ready & to employ it wisely. But one lapse, as stupid as that revealed at our meeting, & it will be the defence of England rather than that of France which will engage us.24

Churchill’s particular concern with Britain’s national security and energetic support for naval preparations in the wake of the Agadir Crisis did not go unnoticed where it mattered. At the end of September, when Churchill visited the Prime Minister in Scotland, Asquith asked him if he would exchange offices with McKenna. Of course, Churchill accepted. “Mr. McKenna and I changed guard with strict punctilio,” Churchill recalled. “In the morning he came over to the Home Office and I introduced him to the officials there. In the afternoon I went over to the Admiralty; he presented his Board and principal officers and departmental heads to me, and then took his leave. I knew he felt greatly his change of office, but no one would have divined it from his manner.”25

As First Lord of the Admiralty Churchill established himself as a leading statesman influencing Britain’s foreign policy. Immediately upon taking office, Churchill began implementing his plans to prepare the Royal Navy for the conflict that lay ahead. He also developed the policy of long-distance blockade which would govern British naval strategy during World War I.26

Despite Churchill’s efforts to avoid it, the Great War seems almost inevitable. Germany’s rising ambitions and the rigid European alliances were powerful factors. For those living at the time, however, war was merely a possibility. It required foresight of leaders like Churchill to prepare Great Britain for the eventuality. In September 1914, with the war on, had  former Prime Minister Arthur Balfour read Churchill’s 1911 memorandum again. He pronounced it “a triumph of prophecy!”27 That was a fitting tribute to Churchill’s sense of preparedness during and after the Agadir Crisis.

Connor Daniels is a sophomore studying history and politics at Hillsdale College and a Winston Churchill Fellow.

10 Winston S. Churchill, undated memorandum, 1917, CHAR 2/89/26-32. At Mansion House on 21 July Lloyd George, hitherto devoted to domestic affairs, declared: “…if a situation were to be forced upon us in which peace could only be preserved by the surrender of the great and beneficent position Britain has won by centuries of heroism and achievement, by allowing Britain to be treated where her interests were vitally affected as if she were of no account in the Cabinet of nations, then I say emphatically that peace at that price would be a humiliation intolerable for a great country like ours to endure.”