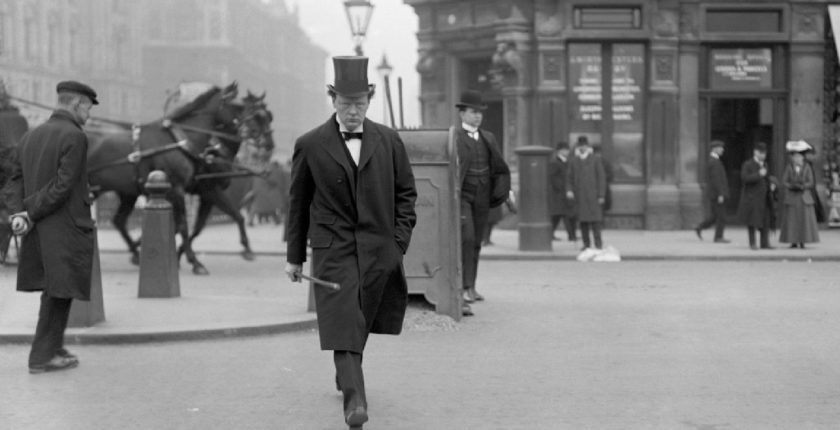 Party rat? Churchill has long been criticized for switching political parties (“ratting” in Parliamentary terms), which he did not once but twice. He left the Conservatives (Tories) for the Liberals in 1904, only to rejoin the Conservatives in 1925. Was he right or wrong?

Churchill was human and he made mistakes, although his errors were eclipsed by his successes. Herewith a series of discussions of the most frequent critiques and their defenses. Reader comment is invited below.

Looking back in 1943, Churchill remarked that the British party system “is much favoured by the oblong form of Chamber. It is easy for an individual to move through those insensible gradations from Left to Right, but the act of crossing the floor is one which requires serious consideration. I am well informed on this matter, for I have accomplished that difficult process not only once but twice.”

Churchill was elected a Conservative Member of Parliament in 1900 and took his seat in early 1901. Almost immediately he argued with his party over several issues, including defense budgets and, crucially, Free Trade. The Conservatives had begun to mute their traditional support of Free Trade, a powerful section of the party supporting “Empire Free Trade,” meaning tariffs on imported goods from outside the British Empire.

Churchill was a Free Trade absolutist almost all his life (except a brief period when he abandoned it in the Depression). Nothing good, he believed, would ever come from tariffs. His principles stand in some contrast to the popular current outcry in America for retaliation against one-sided trade agreements.

The Tory drift toward protectionism outraged young Winston, and he spoke increasingly against it. Finally on 31 May 1904, after a dramatic hesitation at the bar of the House of Commons, he turned to the right rather than to the left and took a seat on the opposition Liberal side on the second bench below the gangway, next to the young Liberal firebrand, David Lloyd George. It was an act that infuriated his Tory colleagues.

Although Churchill’s shift was one of principle, it also proved to be well timed. In the general election of 1906, the Conservatives lost more than half their seats, while the Liberals swept into power. Churchill became part of the great reforming Liberal governments of 1906-15, rising quickly to cabinet rank, and ultimately heading the Admiralty at the outbreak of World War I.

His second party shift came after the election of 1922, when Churchill lost his seat and office in Lloyd George’s coalition government. The Liberal Party was overwhelmed that year by Conservatives and a surging Labour Party; indeed a chief motivation for Churchill to quit the Liberals was their support of Labour, culminating in the 1924 Labour government under Ramsay MacDonald.

Churchill made three attempts to return, and, as a “Constitutionalist,” was successful the third time, in late 1924. Again, the famous Churchill luck was with him. The new prime minister, Stanley Baldwin, asked him to join his  Conservative government as Chancellor of the Exchequer, roughly equivalent to America’s secretary of the Treasury. He rejoined the Conservatives in 1925, and remained a party fixture until his retirement forty years later.

Churchill paid a political price for twice switching parties. Neither the Conservatives nor the Liberals quite trusted him after he jumped sides in 1904, nor did Churchill afford them many assurances to the contrary. He frequently took “unfashionable” positions within the Liberal Party over the next twenty years. Then, back with the Conservatives, he split with them over dominion status for India and, in 1936, the abdication of King Edward VIII, which he unsuccessfully opposed. But his greatest alienation was over the rearmament debates of the mid- to late-1930s. It is frequently argued that Churchill would have had more support over the threat of Hitler had he not been regarded as a turncoat or opportunist.

Switching parties carried a heavy price, but was it worth it under the circumstances? The 1904 switch was principled: Churchill saw protective tariffs as favoring one class over another, a thing he had always resisted. The same position was behind his support, as a Liberal, for curtailing the powers of the House of Lords  in the Parliament Act of 1911; and for his opposition to socialism and expanding bureaucracy from the 1920s to the 1950s.

In his 1927 essay, “Consistency in Politics,” Churchill defended his actions: “The only way a man can remain consistent amid changing circumstances is to change with them while preserving the same dominating purpose.” While circumstances changed, from Free Trade to Parliamentary reform to the rise of socialism, his dominating purpose remained to maximize liberty.

“I shall not be like that saint to whom I have before referred,” he told the House of Commons in 1942, “who refused to do right because the devil prompted him. Neither shall I be deterred from doing what I am convinced is right by the fact that I have thought differently about it in some distant, or even in some recent, past.”

We should consider whether Churchill would have had more support had he not switched parties. We can, of course, only speculate. We  know he was never one to back down from an important fight. Had he stayed with the Conservatives in 1904, he would have remained opposed to them on central issues and would likely have made many enemies in other ways.

Carry on this speculation and a whole course of possible alternatives present themselves. What would Churchill’s career have been like if he hadn’t been a Liberal leader at the outbreak of World War I? Would he have been in any position to learn the lessons of the Dardanelles/Gallipoli campaign of 1915, which so crucially influenced his conduct of World War II?

What if, indeed, there had been no “Wilderness Years”? What if Churchill had remained a loyal Tory, backing (or at least not contradicting) his party over India, the abdication, rearmament or German aggression? What if he had not been the leading critic of Baldwin’s and Chamberlain’s foreign policies?

Churchill himself had no doubt about how destiny had developed. Recall what he wrote about becoming prime minister, in the dark days of May 1940:

“Ten years in the political wilderness had freed me from ordinary party antagonisms. My warnings over the last six years had been so numerous, so detailed, and were now so terribly vindicated, that no one could gainsay me. I could not be reproached either for making the war or with want of preparation for it.”