Nancy Carver’s Story of the Church That Unites Two Peoples 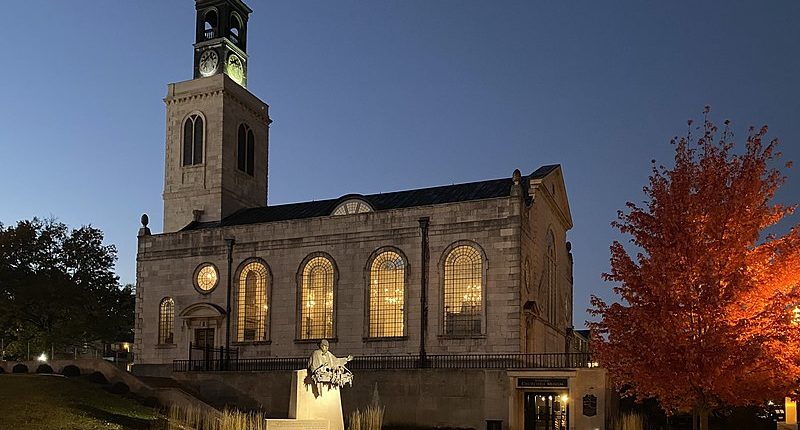 “We must never cease to proclaim in fearless tones the great principles of freedom and the rights of man which are the joint inheritance of the English-speaking world.” —Winston S. Churchill, “The Sinews of Peace,” Fulton, 5 March 1946 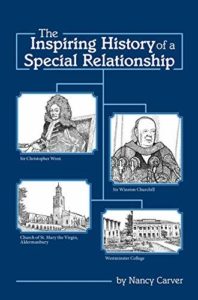 In Callaway County, Missouri, a 12th century church from London stands tribute to Winston Churchill. This is a surprise and a story encompassing the darkest days of the 20th century, the special relationship of America with Britain, and the pluck of small-town America. Nancy Carver, a Churchill Fellow at the National Churchill Museum, tells the story, commemorating the 75th anniversary of Churchill’s speech at Westminster College,

In his speech, Churchill warned of the muffling “Iron Curtain” of Soviet communism and encouraged the English-speaking nations to unite. Before the Cold War was universally acknowledged, Churchill foresaw it, and sought to solidify Anglo-American friendship and its shared ideals of justice and freedom.

Carver’s book divides into three parts. First, she tells the story of Churchill’s speech itself and how it came to be delivered at Westminster College. Central to his oration is the history of the Anglo-American special relationship, which Carver reviews in the second part. Finally, Carver explains how Westminster College imagined and achieved a living memorial to Winston Churchill and his pivotal address: how a bombed historic church in London was transported to the Midwest and reconstructed as a college chapel.

“An idea at a fishing hole”

Carver takes a distinctively American view of the “Iron Curtain” speech. The story arc is not framed within the contours of Churchill’s life, nor within the sweep of geopolitics before the Cold War. Rather, Carver takes a snapshot view within America: the rural setting, the choices which led to it, and the newspaper reaction.

Within this tight focus, the speech appears as it truly was: daring and contentious. Without the sweeping hindsight of historical arcs, we see the boldness of the moment. Like Gandalf Stormcrow in The Lord of the Rings, Churchill’s warnings and encouragements were disliked by those he warned. Pages of newspaper quotes show negative reactions to the speech, some journals calling it outright warmongering. The speech did not float upon the cloud of august respect which memory gives it today. Nor did an imaginary sweep of history make the speech inevitable.

The immediate choices leading up to the speech show how human it was, how chancy. Churchill only gave it where he did because the president of Westminster College had the idea on a fishing trip. He contacted a former Westminster football player with connections to President Truman and thereby booked the most famous man in the world. To read this story reminds us of the power of individual ideas and choices, combined with happenstance.

“The Magna Carta, the Bill of Rights, the Habeas Corpus, trial by jury, and the English common law find their most famous expression in the American Declaration of Independence.”  —Churchill at Fulton

Winston Churchill sought to oppose communism by strengthening the bonds between the British Commonwealth and United States. This would mean not only military cooperation but also a joint voice proclaiming the ideals, rights, and liberties of English tradition. To understand the heart of his speech—to understand this British and American tradition of liberty—requires centuries of history. Carver undertakes the grand task in only 100 pages of her text.

A particular strength of this brief history is how it fuses together American and British values. The dual perspective shines a double light on moments in history. The American purchase of Alaska from Russia could be told from a purely American perspective—as an unsurprising expansion of frontier. Or it could be told from the British perspective—as an incidental result of impoverishing Russia through the Crimean War. Carver sets her Fulton story within the narratives of both nations. Each event becomes another laced stitch in a two-colored embroidery as the threads of the two nations weave together.

A question of proportion

Inevitably an undertaking this large will have flaws. In places modern terminology and concepts are imported into the history of that time. This conveys a lack of sympathetic understanding for those in the past with mixed motivations, good and bad. Personally, my chief complaint is that Queen Victoria is given preeminence far above Queen Elizabeth I: “Victoria became the first to prove that a Queen could rule in a fast-changing world without creating unusual disturbances, including wars.” Does Carver believe that Elizabeth I did not live in a fast-changing world, or that that she created unusual disturbances or wars far beyond Victoria’s? This is a large claim to make about the queen who protected England against the Spanish Armada in 1588. At the least, Carver is not careful in her praise of Queen Victoria.

From blitz to glitz to grit

Weaving through the history of England and America is the story of a church. Situated in the heart of London, the 12th century St. Mary Aldermanbury carried British history within its stones. It burned in the Great Fire of 1666, was rebuilt by Christopher Wren, and half-destroyed in 1940 during the Nazi Blitz. Shakespeare had connections to St. Mary Aldermanbury, and Milton was married in the church. Wren, of course, is best known for St. Paul’s Cathedral (1697).

Wren’s little church, unrestored after the war, inspired the intrepid leaders of Westminster College to transplant it to the United States. There they created a living memorial to Winston Churchill and a symbol of the Anglo-American special relationship. The church’s transplanted stones thus duplicated the journey of the English charters of liberty from Britain to America.

It was a herculean task. These people imagined big things and made them happen. Carver spends the third part of her book describing how a bombed-out church was rebuilt stone-by-stone in the Midwest. It is a tale of Midwestern grit and Hollywood glitz, from the artistry of stonemasons and architects to the fundraising charm of Douglas Fairbanks, Jr. Everyone from President Truman to the Archbishop of London was involved in the memorable endeavor.

The reconstruction of St. Mary Aldermanbury is the right closing to the book—indeed, the right memorial to Sir Winston’s life. Churchill was only great because, with all his stupendous energies, he pursued ideals greater than himself. Does the church stand in tribute to him? Yes. But in a larger sense, Churchill stands in tribute to the church. He spent his life defending the society that it symbolizes. Its difficult transplant mirrors the difficult transplant to America of universal human rights as understood by the English. The freedom to assemble, the freedom to speak, the freedom to worship, and all other freedoms are honored by this transatlantic endeavor. And the timing of its reconstruction—during the Cold War in memory of the “Iron Curtain” speech—reminds us that those freedoms have faced and always will face grave threats.

In Churchill’s own words, the church would “symbolize in the eyes of the English-speaking peoples the ideals of Anglo-American association on which rest, now as before, so many of our hopes for peace and the future of mankind.”

Mr. Forman is a Churchill Fellow at the Hillsdale College Churchill Project, working on IT prototyping. He is a physics major and avid computer scientist, particularly in machine learning.