Professor Cannadine here departs from his historical and political works to compile Churchill’s writings about his art (1912-54). He also offers the views of Churchill’s paintings by contemporaries (1950-70). The book repdoduces thirty-two Churchill paintings in color, dating from 1915 to 1959.

“Churchill did not begin painting until his fortieth year,” Cannadine writes us his introduction. He was not a “born artist.” Nor was he interested in the pictorial arts as a youth. But he had certain gifts. “For Churchill, the visual was as important as the verbal,” the author argues, often with references Jonathan Rose’s The Literary Churchill. In surveying his writings, Rose stressed WSC’s penchant for theatricality, including movies. 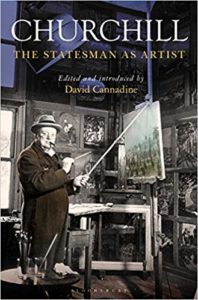 On Churchill’s first steps with the brush, depressed after the 1915 Dardanelles fiasco, Cannadine notes that many soldiers [Alexander, Eisenhower] and depressives [King Frederick Wilhelm of Prussia, George W. Bush] painted during periods of high emotion. Cannadine might have added that this was only a reflection of his literary tastes. Churchill had no time for the novels of his contemporaries of the Bloomsbury group, still less for those of James Joyce. In art, he was “especially appreciative of Turner, the Impressionists and Matisse, and shared their fascination with the effect of light on landscape and water.” To his fellow Royal Academicians in the 1950s, Churchill urged  “a middle course between tradition and innovation” But he himself shied away from innovation. (“You can at least tell what he painted, and that is more than you can say about many of these modern painters,” President Truman once exclaimed.)

How much of Churchill’s fame as a painter was owed to his political notoriety? Certainly much, as he himself once admitted to a fellow artist. An example is the postwar series of exhibitions of his work in the United States, whose motives were not all artistic. The Smithsonian in Washington and the Metropolitan Museum of Art in New York had no prevailing reservations, Cannadine writes. But “art museums in Pittsburgh, Cincinnati and Chicago all refused, on the grounds that Churchill’s works were of insufficient merit or originality…. In Chicago there was a huge public outcry, and the director of the Art Institute resigned soon after.”

Churchill did thrive on recognition. In this writer’s opinion, all his talk of “daubs,” and being “a weekend and holiday amateur” concealed false modesty. So when Cannadine suggests that “Churchill painted primarily for therapy, pleasure and relaxation,” I think we might add “recognition.”

Part One, “Churchill on Art,” reprints twelve of his essays, only one of which, “Painting as a Pastime,” is really well known. The rest include two articles on Royal Academy exhibits and nine speeches. Two of these, to the Royal Academy as First Lord of the Admiralty, were on naval topics, not art. The rest have passing commentary on painting. In 1919 he praised John Singer Sargent’s painful painting “Gassed.”

In 1927 he spoke of “Art and Politics.” His 1932 Royal Academy speech was an amusing blend of those two disciplines. On his fellow painter Stanley Baldwin, whose disinterest in the Indian Empire he was criticizing, Churchill had a quip: “If I were to criticize him at all I would say his work lacked a little in colour, and was also a little lacking in the precise definition of objects in the foreground. He too has changed not only his style but also his subjects.… Making a fair criticism, I must admit there is something very reposeful about the half-tones of Mr. Baldwin’s studies.”

In his last prewar Royal Academy speech in 1938, six weeks after Hitler had annexed Austria, he implored that we “cherish the arts.” He spoke of freedom of the artist, who “in another country” would be submitted to “grievous penalties…if he should be suspected of preferring vermillion to madder brown.” The year before, opening an exhibit of “Sea Power in Art” at New Burlington Galleries, he praised the Royal Navy as protector of British civil and artistic liberties. In Germany, he commented sardonically, an artist may have “only the alternative of being hung if your picture were accepted or hanged if it were rejected.”

Part Two, “On Churchill’s Art,” begins with Eric Newton’s high praise of Painting as a Pastime in 1950. “No man who was not in furious earnest could paint as competently as this.” Included is Thomas Bodkin’s “Unity, Vitality, Infinity and Repose” in Charles Eade’s excellent, all but forgotten Churchill by his Contemporaries (1953). Bodkin, former Director of the National Gallery of Ireland, was no lightweight in the art world. His finely balanced judgment is valuable: “Sir Winston should be described comprehensively as an artist. No one, least of all himself, wishes to describe him as a Master.”

Sir John Rothenstein’s “Gay, Brilliantly Coloured Cannvasses” (1954) derives from another forgotten compendium, Sir James Marchant’s Servant of the Crown and Commonwealth, published on Churchill’s eightieth birthday. As Director and Keeper of the Tate Gallery, Rothenstein’s verdict is significant: “The high peaks of his achievement, in my opinion, are ‘The Goldfish Pool at Chartwell’ (1948), ‘The Loup River Québec’ [sic; it’s in France] (1947), ‘Chartwell under Snow’ (1947) and ‘Cannes Harbour, Evening’ (1923). These express, with insight and candour, his exultant enjoyment of living.” The great Augustus John wrote that he dismissed Churchill’s paintings as amateurish, only to realize later “how, by disregarding the wiseacres and the lures of Fashion, he has, as if by pure instinct, put into practice what surely must be the basic principle of the Masters: ‘to thine own self be true.’”

Rothenstein concludes Part Two by reminiscing about Churchill from his first 1949 visit to Chartwell to the 1965 funeral. Churchill was angered over a story attributing to him offensive words towards Picasso—it has no foundation. Rothenstein also describes the  protracted but good-humored discussions between Churchill and the Tate in 1955 about what pictures the gallery should acquire. Eventually, Churchill donated the aforementioned “Loup River” (1930), which Rothenstein regards as “one of his best.”

It is a pity that the color plates do not include “The Loup River,” nor many canvasses praised by Bodkin and Rothenstein. We do have a selection of Churchill’s best productions, from his first paintings in 1915 (of his sister-in-law and a self-portrait) and 1916 (“Plug Street”). There are pictures of Blenheim and Chartwell, and colorful landscapes of the French Riviera and Morocco. (The owners of Villa La Pausa, where he painted so many of his Riviera pictures, were Emery and Wendy Reves, not “Reeves” as stated in a caption and index.)

Antoine Capet, FRHistS, is Professor Emeritus of British Studies at University of Rouen, France. He is author of a new reference work, Churchill: Le Dictionnaire. This review is excerpted from a much longer review of the book in Cercles, which readers should consult for further information.