Stephen Bungay Adds New Scholarship to the Battle of Britain 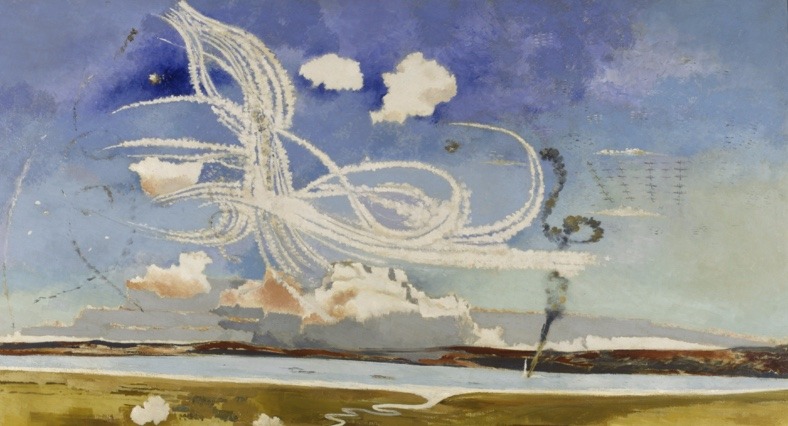 Elements of the Battle of Britain: painting by Paul Nash (1889-1946) blends the images of a winding river, cumulus clouds, planes in battle during the long, hot summer of 1940. (Imperial War Museum, public domain)

Stephen Bungay received much critical and well-deserved praise for this work when published in 2009. It is a well-organized, comprehensive, strategic and tactical account of the Battle of Britain from the British and German sides. Bungay does, however, raise three elements which cause one to question his scholarship. I will start with those, because my subsequent praise of the book might otherwise obscure its unfortunate lapses. 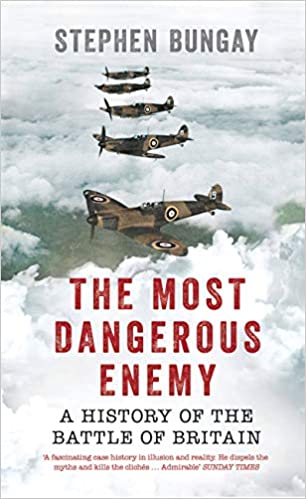 None of the errors were necessary, for none involve the core of the book—the Battle of Britain itself. The first involves the willingness of Britons to acquiesce in an armistice with Hitler in the summer of 1940. The second is Bungay relying on a questionable source about Churchill’s military competence. A third is the use of a discredited source for characterizing Hermann Göring, the Luftwaffe chief directing the German onslaught. The author may not have paid the same attention to detail to these aspects as he does the rest of the book. Had he left all three out, he would have had a better work.

While Churchill does not loom especially large in the book, Bungay recognizes in Chapter 1 the central role he played: “Perhaps the most remarkable thing about the Battle of Britain it that it took place at all. It was a near run thing. That it did take place was due to a single man: Winston Churchill. He gave the Battle its name—before it had begun—and convinced the world it was inevitable.”

So far, so good. Bungay provides an excellent overview and analysis of the political problems Churchill faced upon taking office on 10 May. Then he gratuitously adds two highly questionable observations. First, in summarizing Churchill’s role, Bungay writes that the Prime Minister

claimed he would have been “torn from his place” had he not led the country into [the Battle of Britain]. This is almost certainly untrue [emphasis added]. It was his roar that gave the lion heart. There is no evidence at all that the British nation would not have followed Halifax had he made peace with Hitler [emphasis added].

Actually, there is considerable evidence that Halifax would have had a harder time selling peace or armistice than Churchill did in persuading Britons to fight on.

In February, the British Institute of Public Opinion surveyed public views of peace discussions with Germany. 60% disapproved, 29% approved. In May, after the Norway debacle but before Churchill took office, the response was 76% against, 11% in favor. And 66% thought Britain should be bombing military targets in Germany (at a time when it had yet to do so).

Nor was the British public was well disposed toward “Germans and other foreign nationals living in this country.” Nearly 65% thought the government’s treatment of them had been “too lenient”; only 1.3% thought it had been “too strict.”

It seems fairly clear, then, that Churchill’s rhetoric did not give the British public their “lion heart.” They already had it, as Churchill later declared: “Their will was resolute and remorseless, and as it proved, unconquerable…. I had the luck to be called upon to give the roar.”

The roar was effective. Lord Halifax, his rival for the task, could not pronounce his r’s, was not a dynamic speaker. As prime minister he would have had to change public opinion to sell a deal with an unreliable man like Hitler. Could Halifax have done it? Maybe. But it would have been an uphill slog.

Bungay’s second highly questionable observation is that Churchill was “militarily incompetent.” His “military ideas were romantic, impractical and often dangerous.” Had he disregarded the advice of General Alan Brooke, Britain “would probably have lost the war before the United States had entered the fray.” The author’s only authority for this dubious characterization is the 1973 book, Generalissimo Churchill, by R.W. Thompson.

How wrong is this? Churchill graduated Sandhurst 20th in a class of 130 in 1894. He fought in four foreign wars, served as Minister of Munitions, Secretary of State for War, Secretary of State for Air and twice as First Lord of the Admiralty. Some Sandhurst graduates who were “militarily incompetent” may have gone on to become generals or to hold high office. But Churchill was not among them. (See Eliot A. Cohen, “Churchill and His Military Commanders.”

Certainly Churchill made mistakes in strategy and tactics during the Second World War, but he was far from Thompson’s description. He was likely the most militarily competent Prime Minister and Minister of Defense ever. For more balanced, yet critical, views of his war conduct see Churchill as War Leader by Richard Lamb (1991) and Winston’s War by Max Hastings (2009). Both are cited in the authoritative Churchill biography by Andrew Roberts. R.W. Thompson’s book is not.

Bungay then claims that Hermann Göring had a “life-long” morphine addiction, which is just plain wrong. Properly, Bungay does not claim that the Luftwaffe chief’s alleged addiction had any effect on his performance. But Bungay unnecessarily raises the issue based on an even more dubious source, David Irving.

Bungay could have used a more reliable biography, like Leonard Mosley’s The Reich Marshal (1974), Mosley says Göring’s morphine addiction—stemming from bullet wounds during the 1923 Beer Hall putsch—was cured “cold turkey” in 1927, and he never took morphine again. Painkillers were a different story. Mosley quotes the American psychiatrist who treated Göring at Nuremberg in 1946. Göring was popping pain pills—paracodeine—but they “contained only a small amount of paracodeine…not an unusually large dose. It was not enough to have affected his mental processes at any time.” These are not the “general effects” of a morphine addiction. Göring was self-made. His crimes were all his own. Morphine didn’t make him do what he did.

With that out of the way, let’s stipulate that Bungay has written a really good book. Its level of detail is impressive for both antagonists, the Luftwaffe and the RAF. As such it is invaluable for students and scholars who wish to understand the great air conflict and its outcome.

Take the Luftwaffe. While the Germans developed radar a year before the British, their aircraft had no radios! German Air General Adolf Galland argued that radios were unnecessary: “Pilots could communicate well enough in the air by waggling their wings as they had in World War I and in Spain. [He said] that the radios just added weight.”

Also, the Germans never developed heavy four-engine bombers. They favored two-engine bombers because they could make more of them. Göring “took the simple view that ‘the Führer will not be impressed by how big the bombers are, but how many there are.’”

After France fell, Hitler even banned the Luftwaffe “flying over British airspace in order not to provoke her.” And his solicitude for the British continued. While authorizing further preparations for an invasion on 13 July, he “held forth about grand strategy, explaining that he did not want to inflict a military defeat on Britain, as this would mean the end of her empire and that would bring no benefit to Germany, but only to Japan and the United States.”

The Luftwaffe’s 2-1 advantage in front-line aircraft in July 1940 wasn’t the whole story. The British aircraft industry, with greater efficiency and fewer employees, consistently produced more aircraft. Churchill’s reluctant decision to turn down France’s call for more British aircraft in its losing battle was profoundly correct. Not only did the British need those aircraft to win the Battle of Britain, but the duplicitous French didn’t need them. They had large numbers of fighters in storage units, and few ever asked what happened to their air force. French Chief of Air Staff Joseph Vuillemin later admitted he had more planes available after the fall of France than he did at the outset of hostilities.

During July, the RAF began shooting down unarmed German civilian seaplanes painted with Red Cross markings that were attempting to rescue downed Luftwaffe pilots in the English Channel. In his memoirs, Air Marshal Kesselring condemned these attacks as a war crime in violation of international law. In his own memoirs, RAF Fighter Command’s head Hugh Dowding lamely tried to justify doing so. The German “air ambulances,” he wrote, were “rescuing combatants and taking them back to fight again.” This dubious rationale could equally be used to bomb military hospitals on the grounds that some of the patients there would recover enough “to fight again.”

The German invasion plan as related by Bungay is especially illuminating. In retrospect, Britain was never in serious danger. Hitler was at best lukewarm to the idea. His navy wanted a siege, not an invasion. His army was even more disconnected from reality. They called the operation a “river-crossing on a broad front” using Rhine River barges towed by tugs. Both, however, said “permanent air superiority” was necessary for success. Hermann Göring knew that was simply impossible, and Bungay puts Operation Sealion in proper perspective:

When one compares these preparations with the effort the Allies put into conducting the operation in reverse four years later, it is hard to see Sealion as anything other than a plan of desperation. [Unlike Sealion, the Allies had] “complete air and sea supremacy…Still they thought it was risky.”

In summary, this thick and detailed book does what Stephen Bungay set out to do. It adds immeasurably to the historiography of the great air war, notwithstanding his occasional use of dubious secondary sources to draw conclusions without independent verification.

Michael McMenamin is the co-author of Becoming Winston Churchill: The Untold Story of Churchill and His American Mentor; and a contributing editor to Finest Hour and Reason magazine. He has also collaborated with his son and daughter on a series of historical novels about Churchill’s hitherto unknown adventures during his Wilderness Years in the 1930s. For a full list, please visit his Amazon author’s page.