The Brendon Bestiary: Churchill’s Animals as Friends and Analogies 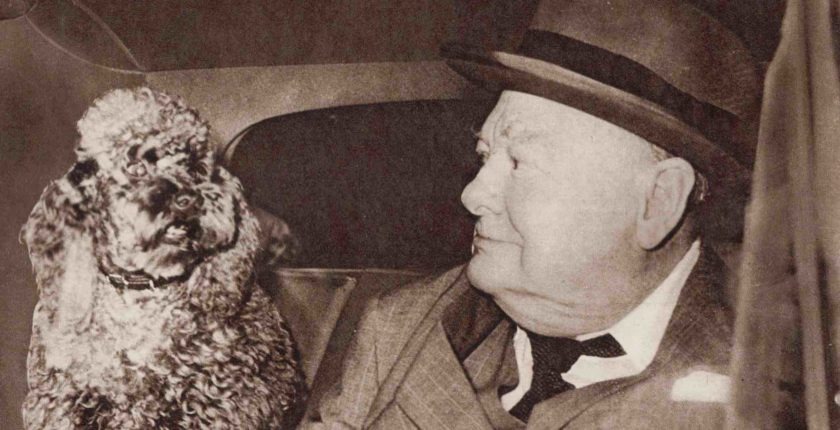 Sir Winston with Rufus II, his close companion from 1947 to 1962. “Dear Rufie” is buried at Chartwell alongside Rufus I.

Sir Winston with Rufus II, his close companion from 1947 to 1962. “Dear Rufie” is buried at Chartwell alongside Rufus I. (Illustrated London News, 1954)

“An enormously agreeable side of his character was his attitude toward animals,” Sir Anthony Montague Browne, his last private secretary, said of Winston Churchill. “Although a Victorian—and they were not notably aware of animal suffering—he had a sensitivity well in advance of his time.” Ever since Sir Anthony said that we’ve been waiting for a good book on the matter, and historian Piers Brendon has obliged. His Bestiary is well named: an encyclopedia on Churchill’s relations with animals, and allusions to them in his writings and speeches. 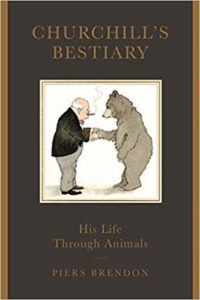 The book is in alphabetical order—starting with “Albatross” and ending with “Zoos.” You can quickly lay your finger on any particular part of the animal world. Brendon is comprehensive, so anecdotes are not all about animals Churchill “knew personally” (as he said of a favorite goose). WSC also deployed animal analogies, many noted here.

For example, bears and eagles represented Russians and Americans respectively. Communists were crocodiles. Toads were the 1930s prime ministers Stanley Baldwin and Ramsay MacDonald. “Rat” was applied both as a noun (to reprehensible people) and a verb (famously to himself on changing parties: “to rat twice” and to “re-rat”). Sometimes Churchill’s analogies overlapped with his animal favorites. He famously likened Bolsheviks to baboons, but Brendon tells us that he also had a baboon as a pet. The research is that deep.

Official biographies of Rufus I and II

The Bestiary contains capsule bios of Churchill’s famous poodles, Rufus I and II. The first, acquired during the Second World War, became a constant companion. In 1947 Rufus was run over by a car. Tears coursed down Churchill’s cheeks when he was told. His replacement was Rufus II, a dog of variable health and “breath like a flame-thrower,” but Churchill was no less devoted. The dog’s health recovered, and he lived until 1962.

Brendon tells us that Churchill even made assignations for his animal friend. In 1955 Rufus II received a proposal from a poodle named Jennifer. WSC sent Rufus’ reply: “My dear Jennifer, On the 10th of April I shall be going…to London. I should be very glad to receive you there.” The letter was marked, VERY PRIVATE.

The poodles slept with Churchill and ate in the dining room with the family. A chair was reserved for them during evening film shows. Once, watching “Oliver Twist,” the movie reached the point where Bill Sykes drowns his bull terrier to throw the police off his track. Churchill covered Rufus’s eyes with his hand: “Don’t look now, dear. I’ll tell you all about it afterwards.”

Late in his life, Field Marshal Montgomery presented Sir Winston with a green budgerigar (parakeet) named Toby. Quite tame, he was often let loose to fly around. When Churchill was awake and maintaining “bedroom office hours,” Toby was let out to perch on the breakfast tray—or on the heads of those present.

Brendon describes a session Toby spent on the bald head of Chancellor of the Exchequer R.A. Butler. Butler had come to discuss the budget, and Toby left fourteen tokens of esteem on RAB’s pate. “The Chancellor was amused, though Churchill called him ‘old cock’ while he called Toby ‘Darling.’ Wiping his head with a white silk handkerchief, Butler sighed: ‘The things I do for England….’”

At mealtime, Toby “strutted across the dining table, knocked over glasses, helped himself to grapefruit, fought with his reflection in the silver pepper pot and chattered like a schoolgirl at a picnic.” Toby even tried whisky, Brendon writes, and “apparently once fell into his master’s brandy glass. This did nothing to diminish Churchill’s affection….”

In his role as literary aide, Toby lapped ink from Churchill’s pen, “embellishing his letters with blots and scribbles…. He nibbled the edges of book and proof pages—“an indication, in Churchill’s view, that he had read them: ‘Oh! Yes, that’s all right,’ Churchill would say, ‘give him the next chapter.’”

Sadly, in 1961 in Monte Carlo, Toby flew out of an open hotel window and was never seen again, despite frantic searches. Churchill was distraught because he admired Toby as a person. Once, looking closely at the bird’s feathers, blue-green on one side, reddish on the other, he remarked: “Out of that small body is produced the mechanism that made all those feathers in that pattern. All the machinery in the world could not do that.”

Lord Wardens of the Cinque Mouseholes

Wherever Churchill lived there was a cat or two. At Chartwell in the 1930s there were Tango, a marmalade, and Mickey, a semi-feral tabby. Tango was a neutered male, but Churchill always called him “she,” and allowed “her” on the table to lick a saucer of cream.

When he moved to Downing Street from the Admiralty in 1940, he brought along Nelson, a formidable grey tom who served the war effort, he said, “by acting as a prime ministerial hot water bottle.” Nelson soon chased away the previous resident, a holdover from Chamberlain whom the Churchills had christened “Munich Mouser.” Nelson was congratulated. But the PM was aghast during an air raid, to find Nelson hiding under a chest of drawers: “Come out Nelson! Shame on you, bearing a name such as yours, to skulk there while the enemy is overhead.”

Other Chartwell cats were addressed Mister or Miss Cat. Churchill attempted conversation with them, not always successfully. On a certain morning, meeting one in the passage, he said, “Good morning, Cat.” The cat deigned not to reply. He slashed at it and it ran away. Remorseful, he had a card placed in a window: “Cat: Come home. All is forgiven. Winston.” Cat did return, and was rewarded with fresh salmon and cream.

For Sir Winston’s 88th birthday in 1962, his private secretary Jock Colville presented him with a ginger tom his boss named “Jock.” This faithful cat was on his bed at Hyde Park Gate when he died. At his request, Chartwell has kept a ginger cat named Jock on the premises ever since.

At Chartwell, Brendon writes, animals inhabiting the farms and woodlands were as dear as pets. Churchill was a keen farmer. He never made money at it, but his husbandry was first-class. A Guernsey cow, given to him by the people of that island, won numerous awards. He had great sympathy toward bovines. “One of the heifers has committed an indiscretion before she came to us and is about to have a calf,” he wrote his absent wife in 1935. “I propose however to treat it as a daughter.”

The Churchills’ friend Lady Diana Cooper listed some of Chartwell’s more or less domestic birds: “five foolish geese, five furious black swans, two ruddy sheldrakes, two white swans—‘Mr. Juno and Mrs. Jupiter,’ so called because they got the sexes wrong to begin with—two Canadian geese (‘Lord and Lady Beaverbrook’) and some miscellaneous ducks. The basket of bread on Winston’s arm is used first to lure and coax them and then as ammunition.” Churchill said: “We must make a policy. You stone them and we will get the five flying fools on their right flank.” (This should not be misinterpreted: Churchill, who would not hurt a fly, was frequently seen feeding these and smaller wild birds who came to his hand.)

Piers Brendon supplies a long chapter on swans, including the exotic black variety from Australia, which thrived in Chartwell’s ponds. Alas, they were vulnerable to the predations of foxes—who roamed freely because Churchill could not resist trying to befriend them! Being a gift of Australia, the swans sometimes played an interesting diplomatic role, which Brendon carefully limns. Sir Winston related to the swans “in a personal and paternalistic fashion…[He loved] to give them bread and feel them nibbling at his fingers, to look at them and look after them with ‘tender solicitude.’”

Brough Scott’s Churchill at the Gallop is the most detailed book on this topic, but Piers Brendon does it justice in two chapters, oddly separated into “Horses” and “Racehorses.” From his training at Sandhurst to riding with hounds in his seventies and racing thoroughbreds into his eighties, Churchill loved horses. He trained, paraded, fought and played on horseback.

Stationed in India, he maintained several polo ponies, and was in his Fifties when he played his last chukka. His compassion was displayed in his efforts to repatriate Britain’s surviving war horses at the end of World War I. Brendon thoroughly covers his postwar horse racing; Churchill owned fifty thoroughbreds, including a dozen brood mares. He was influenced by memories of his revered father, adopting Lord Randolph’s racing colors of chocolate and pink.

His most famous and winning thoroughbred was Colonist II, a French three-year-old he acquired for £1500. “Why don’t you sell your horse?” a Labour opponent shouted. WSC replied: “I am doing my best to fight against the profit motive.” Asked why he didn’t put Colonist to stud he cracked: “What? And have it said that the Prime Minister of Great Britain is living off the immoral earnings of a horse?”

A world of animals

Churchill’s first encounter with a giant panda was at the London Zoo. He “gazed long at the animal, lying supine and unaware of the honour done to it.” Then he exclaimed: “It has exceeded all my expectations…and they were very high!” His daughter Mary said her father thought the panda “satisfies the need for cuddleability.”

Another zoo favorite was his lion “Rota,” presented by an admirer in 1943. “I don’t want the lion at the moment either at Downing Street or Chequers owing to the Ministerial calm which prevails there,” Churchill told the Zoo. Later he showed Rota’s photograph to a diminutive secretary, Patrick Kinna: “If there are any shortcomings in your work I shall send you to him,” he winked. “Meat is very short now.”

This is just a representative fraction of Piers Brendon’s comprehensive book. He avoids repeating material in several previous accounts, and goes much deeper into the subject. Most of the anecdotes have not appeared previously and are thus quite valuable. Anyone interested in the personal side of the great man owes it to themselves to buy a copy.