The Churchill Project - Hillsdale College > Articles > Books > 2016 > “All Behind You, Winston” – by Roger Hermiston

“All Behind You, Winston” – by Roger Hermiston 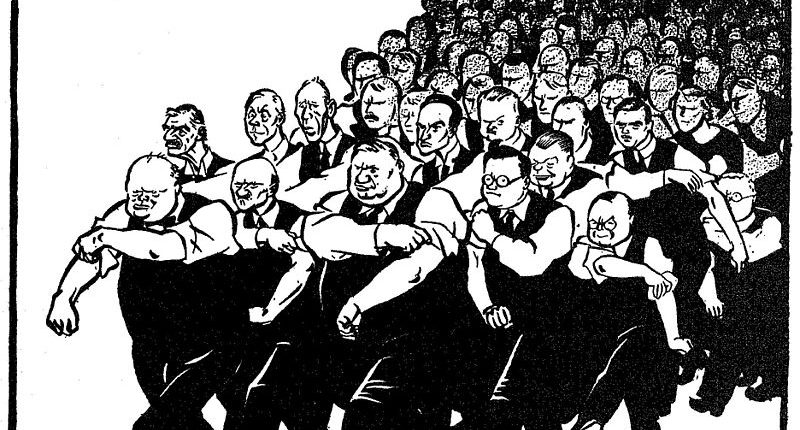 “All Behind You, Winston.” The caption of David Low’s famous cartoon in the Evening Standard, 14 May 1940, is a fit title for this book. Front row: Churchill, Attlee, Bevin, Morrison, Amery. Visible behind them are Chamberlain, Halifax, Sinclair, Duff Cooper and Eden. (British Cartoon Archive, University of Kent, www.cartoons.ac.uk)

The tale of Britain’s World War II coalition government has been told before—day by day by Martin Gilbert, in bits and pieces by the memoirs of various members. So a cynic might call this book a rehash, along the lines of a current best-seller on Churchill’s early adventures which contains nothing new besides the author’s opinions. The author’s opinions are of course valid, and they exist here. But Roger Hermiston goes far beyond that. He offers a elegant, thoughtful and thoroughly researched account of the collection of talent, ego and political diversity Churchill assembled to save his country—and much else besides.

“Churchill’s titanic reputation,” the author says, has tended to eclipse the vast cast of men—and women—who steered Britain through the worst crisis in her history. Nevertheless, and to his credit, Churchill put them together. We see here not only how they worked in harness, despite manifestly different backgrounds, but how Churchill—whom many say had no concern for others—orchestrated their performance. A cynic might also suggest that it takes a major war every couple generations to focus a nation on purposes and essentials. One hopes not; but All Behind You, Winston makes one wonder. 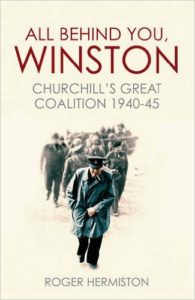 rom this balanced account of the war’s forgotten heroes. Oft criticized for being comfortable only with cronies and old reprobates, he somehow managed to appoint either the right crony, or a former foe who was no crony at all. The object was victory, Churchill told them: “victory at all costs, victory in site of all terror.” In achieving that, he took talent where he found it, and chose it well.

When the PM made Lord Beaverbrook Minister of Aircraft Production, many complained that the old buccaneer would soon burn himself and the Ministry out. They were wrong. Beaverbrook pushed aside “conventional figures” like Freeman and Tedder, and brought in competent industrialists who knew how to fix things. One of these was “an exuberant 42-year-ld Irishman, Patrick Hennessy,” former general manager at Ford of England. “We broke all the rules,” Hennessy said, to clear the logjams of materials and components, and repair broken aircraft, flinging restored planes back into the Battle of Britain. “Beaverbrook formed action squads to enter likely stores of spare parts and remove them, despite furious protests. He commandeered aircraft to fly to France to pick up damaged engines and components…even commissioned [Sir John Black’s] Standard Motor Company to manufacture a light armoured vehicle—nicknamed the ‘Beaverette’—to defend his factories.” (73)

The PM’s Minister of Food was another self-made industrialist, Frederick Marquis, Lord Woolton, who would chair the Conservative Party after the war and help lead it back to power in 1951. Marquis “leaned leftwards” as a young man, Hermiston writes. Keir Hardie, founder of the Labour Party, told him, “I am a vegetarian, a teetotaler, a non-smoker, and I always sleep on a hard bed. I have reduced my wants to a minimum and no one can buy me.” Woolton blinked: Hardie was “an ardent reformer and a Puritan, but not a deep thinker,” but Woolton decided that “he had no difficulty reconciling socialist principles with the possession of wealth, or indeed the pursuit of it.” Woolton thus became that rarest of politicians, a blue collar plutocrat beloved by the common folk.

At the top, Churchill didn’t just mouth unity and coalition: he genuinely believed in it. He was open to everyone, the extreme socialist, the irredeemable Tory. When the Conservative John Anderson fell short of the job as Minister of Home Security, Churchill appointed Labour’s Herbert Morrison, his former staunch critic, “a charismatic leader who was close to Londoners and would invigorate them…and a minister who could win over the disgruntled press” (101). Morrison immediately tackled the government’s inadequate household shelter, which his scientific advisor labeled a “death trap.” Uncomfortable pause: it was based on a sketch Churchill had drawn himself. But the Prime Minister immediately saw the light: “That’s the one, make 500,000 in the next three months and give them to the people. Show them that it is safe, blow a house up on one, put a pig in it, put the inventor in it,” he shouted, digging the inventor in the ribs (111-12).

A bonus in this book is the author’s clear-eyed analysis of why Churchill was voted out of office in 1945—astonishing at the time, and second-guessed for generations. Take the infamous “Gestapo speech,” in which the campaigning prime minister said a Labour government would inevitably have to rely on a kind of secret police to enforce its orders. Voters had trouble picturing mild-mannered Clem Attlee as Heinrich Himmler. But some have incorrectly blamed the loss on that for decades. Per Hermiston, it  “was merely a symptom of the Conservatives’ malaise, rather than a material cause of their defeat. During wartime, ‘fair shares for all’ and a genuine equality of sacrifice had been the overriding mood; the country had been ‘socialised,’ to use Churchill’s phrase, and had not objected” (366).

Hermiston suggests that Churchill himself had opened the floodgates. In late November 1944 he reflected on the coming election: “There is one thing that is quite certain, all the leading men in both the principal parties are pledged and committed to this great mass of social legislation, and I cannot conceive that whatever may be the complexion of the new house, they will personally fail to make good their promises.” We could (and should) make note of the difference between the Labour and Conservative programs. The Labour government produced “an astonishing 347 acts,” Hermiston notes. If the voters were ready for them, they would have plenty of time to object later.

The war had worn out many of those great leaders, Hermiston observes. They had worked, many of them, “up to sixteen hours a day for five years, with the nation’s very existence at stake.” Eden was invisible in the ’45 election, convalescing after a duodenal ulcer. “In 1953, he would suffer a botched operation to remove gallstones, and his premiership [1955-57] was continually dogged by ill health, necessitating three major operations” (372).

Conversely Churchill, “whose extraordinary working regime and fondness for rich living might have been expected to take their toll far sooner, outlasted the majority of his colleagues. And yet, from left to right, they had worked united, as Anthony Eden is quoted, with “respect, friendship and even affection. I doubt if it would have been tolerable otherwise.”

And so on 23 May 1945, the coalition wound up. Churchill formed a caretaker Tory government to take the country through to the July election. Archibald Sinclair, his longtime friend, leader of the minority Liberals, gave Churchill the epilogue: “We have done something together in the past five years…For my part I can imagine no greater honour than to have served in your war administration, which now passes not inglorious into history.” Indeed so—inglorious it wasn’t.