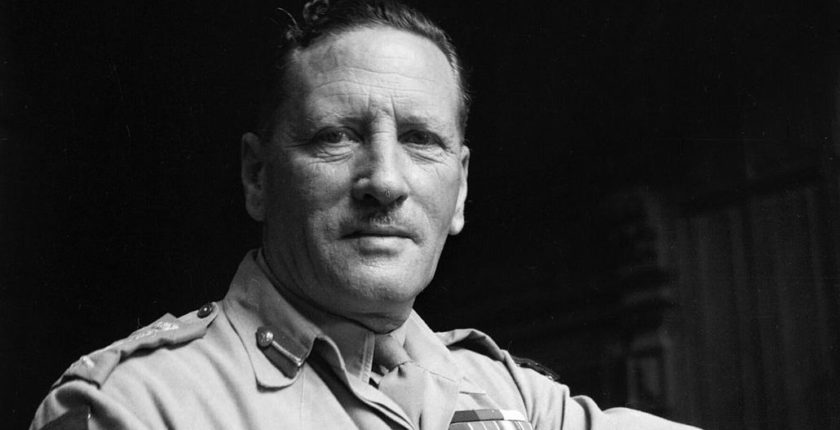 Claude John Eyre Auchinleck was born in 1884. His parents were typical of families that staffed the British Empire for most of its existence. His father was from Scots-Irish Ulster stock, his mother from the Anglo-Irish gentry, the governing class of Ireland from the 17th to the early 20th century. His father was an officer in the prestigious Royal Horse Artillery. The family was posted in India during his youth. Sandhurst was not an inevitable destination for someone of Auchinleck’s background, but a highly likely one. On graduation, however, he did not follow his father into the regular British Army but joined the Indian Army.

The Indian Army was founded in the mid-18th century by the East India Company. Upon the Company’s demise in 1858, it passed into British government hands, while remaining an independent entity. The Company’s own military academy at Addiscombe was closed and henceforth its officers were trained at Sandhurst. After graduation, however, they followed entirely distinct career paths.

There was a certain tension between the officers of the two services, whose social class backgrounds were often different. Many Indian Army officers came from less “posh” backgrounds than their British Army counterparts. There were different customs, traditions, roles, and missions. It all added up to enough of a difference to produce rivalries and misunderstandings, despite their Sandhurst background. This would play out at a critical moment in Auchinleck’s career.

Like all British and Indian Army officers of his generation, the First World War was a watershed for Auchinleck. He did not serve on the Western Front but on the Indian Army’s equivalent, the brutal, grinding four-year campaign in Mesopotamia, the Ottoman-controlled region encompassing today’s Iraq. He had the experience of watching bad logistics and bad leadership produce disaster: the surrender, at Kut in 1916, of an entire Indian division. He also witnessed the rebuilding of the battered Mesopotamia forces by Lieutenant General Stanley Maude. It was a lesson that Auchinleck learned well. (So did a young British Army officer named Slim, who would lead the great XIV Army in the next war.) By 1919 Auchinleck, a captain in 1914, was an acting lieutenant colonel with a DSO. He was clearly marked as someone who would go far.

In the interwar years Auchinleck rose steadily through a series of command and staff appointments. By the late 1930s he was in line to become the next Commander-in-Chief, India. This led to his being chosen for a corps command in Britain, to refamiliarize himself with the British Army and its senior figures. He would need to work closely with these when he took over the Indian Army in 1941. This appointment in many ways was crucial for his future, because he met the person who would do much to shape it: Winston Churchill.

When Auchinleck returned to Britain he was first given a corps command. Almost immediately, however, he was sent to northern Norway at the end of April 1940. A hastily assembled Allied force had been trying to take the small town of Narvik. The port was crucial to the shipments of essential Swedish iron ore to Germany. Auchinleck’s job was to insert drive into the stalled operation. This he did, but almost immediately had to demolish port facilities and withdraw because of the worsening situation in France. However, Auchinleck’s success caught the attention of the new prime minister—and Churchill would remember.

Back in Britain, Auchinleck was given another corps command. Again almost immediately he moved upstairs to take over Southern Command. Here he was responsible for defending some of the likely invasion beaches. One of the units in his command was 3rd Division, commanded by Major General Bernard Montgomery. “Monty” had a tendency, even before he became famous, to do things his way rather than following the rules. Auchinleck often had to call him to order. Montgomery, in his Sandhurst days, had thought about applying for the Indian Army. But that service only took the top graduates, and Monty didn’t make the cut. Thereafter he was rather dismissive of the Indian Army. Auchinleck was an Indian Army officer. Monty also remembered.

After a hectic six months, Auchinleck flew back to India to become commander-in-chief. While the Raj was far from the war as 1941 opened, it was already feeling the war’s reverberations.

The Indian Army had long functioned as the Empire’s strategic reserve east of Suez. Sepoys of the East India Company’s Madras Army had taken Spanish Manila in 1762. In the years since, Indian troops had fought everywhere from the Western Front in France to north China. Now, France was gone and Italy was threatening the British position in the Mediterranean and Middle East. London told Delhi that its existing plan for the slow expansion of its army was to be changed to rapid open-ended expansion.

Certainly, men were available (eventually over two million enlisted), but equipment wasn’t. Tank brigades were being raised even though there was not a single modern tank on the subcontinent. As the Indian Army exponentially grew, the war rolled ever closer. By spring 1941 it was on India’s doorstep. Meanwhile, Irwin Rommel’s first offensive drove the British in the desert and a pro-Axis revolt toppled the pro-British ruler of Iraq.

Iraq was regarded as an outwork of India’s defenses by the Indian Army headquarters. There were contingency plans for intervention there, should it be necessary. Despite the state of flux in the Indian Army caused by its breakneck expansion, Auchinleck responded rapidly when India was asked for assistance. The new 10th Indian Infantry Division landed at Basra, the Iraqi port at the head of the Persian Gulf. Lumbering, obsolete transport planes (the only kind available in India) seized the nearest airfield by simply landing and disgorging infantry.

In faraway London, Churchill was impressed by Auchinleck’s vigorous response, contrasted with the reluctance of his beleaguered Middle East commander, General Archibald Wavell, even to get involved in the suppression of the Iraqi rebellion.

Auchinleck took over his vast theater with significant handicaps and a number of intractable problems. His chief problem was that he came from the Indian Army. It is easy now to forget that deep institutional gulf that separated the Indian Army from the regular Army. Many British regulars regarded the Indian Army—and its British officers—as second rate. The two armies had, in fact, very little contact.

Every institution has hidden networks of power, influence (and gossip). Auchinleck had never been “plugged in” to the British Army’s. He was taking over a command in which the British Army predominated. He would later be criticized for some of his critical personnel choices. Much of the explanation for those choices lies in his unfamiliarity with the British Army.

He also inherited several problems that would outlast his time in the Middle East. His forces were technically “British” but in fact a Dominion and imperial coalition. They comprised his own Indian Army, Australians, New Zealanders, and (white) South Africans. Fighting alongside were small contingents of Poles, Free French and Greeks.

As Auchinleck took over from Wavell, a row between London and Canberra was brewing. The Australian government was worried about its 9th Division, besieged in Tobruk since April. With unhappy memories of the fate of Australian units under British command in World War I, the Australian government wanted their division relieved. Conscious of the naval and air commitments involved, London wanted delay. In the end, after much edgy back and forth, the Australians prevailed. Auchinleck was still acclimating to his new responsibilities and planning a major offensive. Now had to carry out the relief, which amounted to a major military operation.

Then there was the “Northern Front.” When Auchinleck arrived, Middle East command had a long front facing north, quiet but vulnerable. With Germany’s stunning early successes against Russia, that front became a major preoccupation. What if, complementing Rommel in the west, German forces drove through the Caucasus to the oilfields of Iraq and Iran? What if Turkey, awed by German victories, allowed German panzers to roll through Anatolia?

Of course, this never happened. Yet throughout Auchinleck’s time in Cairo (July 1941-August 1942) it looked very much like it might. He needed constantly look over his shoulder while facing Rommel. This is something that must always be borne in mind when assessing Auchinleck’s generalship.

…and the British Army

Finally, there was the nature of the British Army itself—the instrument with which Auchinleck had to work. (The Dominion armies were trained along the same lines.) More men and materials were arriving from Britain, yet much equipment was not fit for the purpose. British tanks were still not mechanically reliable, and the doctrine and training of the British Army had still not caught up with that of their German opponents.

The Wehrmacht had mastered combined arms warfare. It used tanks, artillery, infantry, and tactical air power in unison—to lethal effect. The British Army tended to fight “separate wars,” each arm operating substantially on its own. Ostensibly they were coordinated, but in practice not always in close combination. Rommel’s tactical wizardry was important, of course. But the real secret of German success in the desert war was how German units operated. All this became very obvious when Auchinleck’s forces, now known as 8th Army, launched Operation Crusader in November, 1941.

The British had the edge in numbers of tanks and men—and the advantage of surprise. But in the swirling, confused three-week struggle before Rommel retreated, the tactical advantage often lay with the Germans. Indeed, at one point Rommel’s skill in maneuver so unnerved the 8th Army commander, Lieutenant General Sir Alan Cunningham, that he proposed to break off the offensive and fall back to Egypt. Auchinleck promptly flew up to the front, sacked Cunningham and took personal command of 8th Army. It was the turning point in Crusader.

Auchinleck was showing that he could not be bluffed by Rommel’s tactical legerdemain. Remorselessly he wore him down and forced him back. In December, everyone’s attention in London was temporarily diverted to the Pacific as Japan’s entered the war. But in North Africa, Rommel was in full retreat. By January, Auchinleck’s advance units had reached the point where General O’Connor had halted a year before. Churchill had appointed Auchinleck to win against Germans, and “The Auk” had done that. Crusader was the first clear-cut British battlefield victory of the war over the German army. This was achievement at last—a victory all too often forgotten.

Dr. Callahan is Professor Emeritus of History at the University of Delaware and a leading scholar of the Indian Army in the two World Wars. He taught at the University for 38 years and was director of the Master of Arts in Liberal Studies program, where an annual student prize bears his name. He is the author of Churchill and His Generals (2007) and Churchill: Retreat from Empire (1997). He thanks his daughter Sarah, “who made it possible for me to write, while recovering from back surgery, by turning my scrawl into usable copy.”