The Churchill Project - Hillsdale College > Articles > Explore > Churchill Between the Wars > Churchill and the Litigious Alfred Douglas: Two Trials and a Sonnet (Part 2)

Churchill and the Litigious Alfred Douglas: Two Trials and a Sonnet (Part 2) 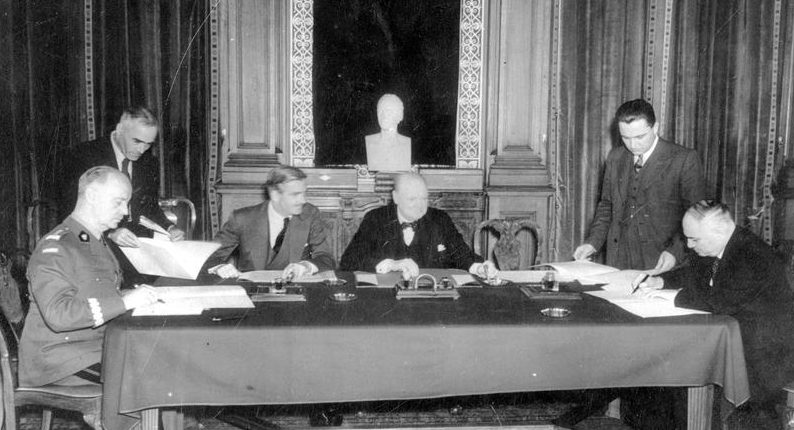 “The imminent shadow of the ‘Winston touch.’” As Lord Alfred Douglas published his sonnet to his old enemy, Churchill cemented Britain’s first wartime alliances. Here he presides over the signing of the Polish-Soviet agreement with Polish Prime Minister Władysław Sikorski and Russian Ambassador to London Ivan Maisky, 30 July 1941—see our review of the Maisky Diaries at bit.ly/3gP3RwF. (Wikimedia Commons, public domain)

Lord Alfred Douglas thought he had Winston Churchill just where he wanted him—in the witness box, undergoing cross-examination. Douglas’s counsel, Cecil Hayes, a junior barrister, was much more likely than his more experienced predecessor, Comyns Carr, to follow his client’s precise instructions on questions for “dear Winston.” (Concluded from Part 1.)

Churchill was the second witness for the prosecution. The prosecutor was the Attorney General, Sir Douglas Hogg. Churchill was asked about the first government communiqué about the Battle of Jutland. This caused the drop in the market for stock of British companies for which Douglas had blamed Churchill.

Hogg: “Did you know anything about the communiqué of June 3rd [1916] before it was issued?”

Hogg: “Were you consulted as to its issue?”

Hogg: “Did you know anything about it until it appeared in the Press?”

Churchill then described how, at government request, he had come to write his more favorable “appreciation” of Jutland. Typical of Churchill’s writing practice, he dictated the communiqué to an Admiralty stenographer. He then showed it to Lord Fisher, then First Sea Lord. Now retired, Fisher told Churchill that his appreciation was “exactly right.” Next, Churchill said, he telephoned the Admiralty and authorized it to issue the communiqué over his name.

Hogg turned to Churchill’s relationship with Sir Ernest Cassel, a German-born naturalized British subject and Privy Councillor. Churchill admitted their close friendship. Sir Ernest had long been a friend of the Churchill family, including his parents, Lord and Lady Randolph Churchill. In 1899, Churchill had asked Cassel to invest his earnings as a writer and lecturer. He gave Cassel £12,000 to invest (over $1,200,000 in current value). Cassel had charged nothing for his services. These facts had not come out in the first trial five months earlier.

Churchill denied that Cassel had given him a gift of furniture, or anything else after the Battle of Jutland. But there was an element of truth hidden in the charge, which Hogg brought out on direct examination:

Hogg: “Did Sir Ernest Cassel give you any furniture?”

Churchill: “The foundation for this was that in 1905 I took a small house in South Bolton Street, and Sir Ernest asked Lady Randolph whether he could furnish a library for me. She consented.”

Churchill also volunteered that in 1908, Cassel had given him a wedding present of £500. This had not been mentioned in the first trial either. It was not scandalous, but was previously unknown, as was Cassel’s management of Churchill’s literary earnings. It is a tribute to Hogg’s lawyering that all of this was brought out in direct examination. Had it arisen during cross-examination, it might have appeared more sinister.

To the dismay of Alfred Douglas, young Cecil Hayes was no match for Churchill on cross-examination. One example involves Churchill’s visit to the June 1914 Kiel Regatta as a guest of Kaiser Wilhelm. Here Hayes attempted to show the German-born Cassel’s supposed sinister influence:

Hayes: “Had you any idea that the Emperor was humbugging you with that hospitality at Kiel?”

Churchill: “I do not think he was. I do not think that at the time of the Kiel Regatta there was any intention of going to war on the part of Germany, but the whole situation was altered by the murder of the Archduke [Franz Ferdinand].”

Poor Hayes then afforded Churchill the opportunity to display his wit.

Hayes: “We do not know the cause of that murder.

Churchill: “I had nothing to do with it!”

Mr. Justice Avory: “Is all this supposed to show the domination of Sir Ernest Cassel over Mr. Churchill?”

Hayes: “I suggest that Mr. Churchill was influenced as a young man and dominated by Sir Ernest Cassel.”

Hayes to Churchill: “I put it to you that you were influenced by Sir Ernest Cassel in these German overtures and dominated by his personality?”

Churchill: “Certainly not. I was not at all. I was influenced by an earnest desire to prevent a breach between England and Germany.”

Finally Hayes questioned Churchill the civil luncheon for Lord Haig in Dundee in 1919. There Churchill was accused saying the Jutland communiqué was to “get the money out of the Yanks.” Churchill denied this categorically. After cross-examining Churchill for one and a half days. Hayes concluded. After calling several Admiralty witnesses, and private secretaries to Cassel and Balfour, he rested his cross-examination.

Opening for the defense, Cecil Hayes attempted to create a credibility contest between Churchill and Douglas. Perhaps alluding to Churchill’s American mother, he asked the jury if, like George Washington, WSC was incapable of lying. If that were so, Hayes said, the defense would have no case. He then tried to put Churchill and Douglas on the same moral scale:

Historically, and by lineage, Lord Douglas’s family is perhaps the premier family of Scotland. Mr. Winston Churchill is descended from the great Duke of Marlborough. Therefore both men stand before you as members of the same caste and class. Nobody in the world can ever say that anything Lord Alfred Douglas has ever done in any journal was for pay or money. He is an honest man and was once called an honest fool. It is through his honesty perhaps that he has been brought to his present position, and everyone must come to the conclusion that he believes everything he has written.

Unfortunately for Douglas, his belief in what he wrote would not help him, as in the first trial. In this case, truth would be his only defense.

Condemned by his own words

Lord Alfred Douglas was Hayes’s first witness. He proved to be less than temperate on the stand as evidenced by the following exchange with the judge:

Mr. Justice Avory: “Your attention has been called to the issue of Plain English of March 19th, 1921, which contains a letter to the Home Secretary. Did you write it?”

Avory: “Including this passage? ‘We are not in the least afraid of the Public Prosecutor, because even that official, backed up by the evil forces which control the present Government, has no power to dispense with a jury. We take the liberty to tell him that if he fondly imagines he will be able to obtain a conviction against us by prosecuting us in the absence of the person whom we have accused [Mr. Churchill] he is making even a bigger mistake than the Government made when they put up Mr. Justice Darling in a vain attempt to secure the conviction of Mr. Pemberton.’ Did you write that?”

Douglas: “I did…. Mr. Justice Darling was very anxious to get Mr. Pemberton Billing convicted and used every possible art.”

Avory: “You wrote that he [Darling] had been put up by The Government to secure a conviction?”

Douglas: “These things are done. I have not been allowed to put my case before the court at all. I have been treated grossly unfairly. Every time I tried to present my case to the jury I have been prevented from doing so. I have never been able to tell the jury why I did it or where I got the information, and everything has been stopped. It is the most abominable piece of unfairness I have seen in my life.”

After the testimony of Douglas, his defense lay in shambles. Accusing a fellow judge of fixing a case at government direction doesn’t endear you to the judge presiding over your case.

Douglas’s main source, Captain Harold Spencer, was the next witness. He confirmed that he had told Douglas the alleged conversation with Churchill about Jutland. He also testified that the civil servant Sir Edward Packe had told him on the evening after Jutland that Churchill had been responsible for the issuance of the false report, even though Packe had denied this in the prosecution’s case. Hogg’s cross-examination was brief but devastating. He established that in September 1917, an Army Medical Board had certified Spencer insane, unfit for further military service.

The jury deliberated only eight minutes before rendering a decision of guilty. Douglas had prevailed on the same libel for which he was now convicted. The first jury had believed he had not acted in “reckless disregard” of the truth. The second jury wasn’t so constrained. They did not have to judge Douglas by an actual malice standard. But Mr. Justice Avory stated that, based upon the evidence, Douglas would not have prevailed, under such a lenient standard:

Alfred Bruce Douglas…. In view of the fact that in the action tried in the High Court against The Morning Post you had full notice that these accusations were untrue, and in view of the fact that the only person upon whom you apparently sought to rely in support of this plea of justification was a person like Harold Spencer, whom you yourself had denounced in your own paper as unworthy of belief, I must act on the view that you have deliberately persisted in this plea of justification without the slightest excuse, or without the slightest ground for believing that you are now telling the truth in this plea.

The judge sentenced Douglas to six months in jail, most of which was spent in the prison hospital.

Lord Alfred Douglas was no longer angry. He looked down at his copy of The Daily Mail and found, prominently featured, a sonnet he had recently submitted, entitled Winston Churchill:

Not that of old I loved you over-much
Or followed your quick changes with great glee
While through rough paths or harsh hostility
You fought your way, using a sword or crutch
To serve occasion. Yours it was to clutch
And lose again. Lacking the charity
Which looks behind the mask, I did not see
The imminent shadow of “the Winston touch.”
Axe for embedded evil’s cancerous roots,
When all the world was one vast funeral pyre,
Like genie smoke you rose, a giant form
Clothed with the Addisonian attributes
Of God-directed angel. Like your sire
You the rode the whirlwind and out-stormed the storm.

Douglas’s nephew sent an advance copy of the poem to Churchill. He had been prime minister for over a year rallying the British when they stood alone. Later he would describe their response to German air attacks as “Their Finest Hour.”

In responding to this gesture, Churchill lived up to his lifelong motto: “In victory, magnanimity”:

Thank you very much for the sonnet you sent me which I shall keep and value. Tell [Lord Afred Douglas] from me that “Time Ends All Things.”