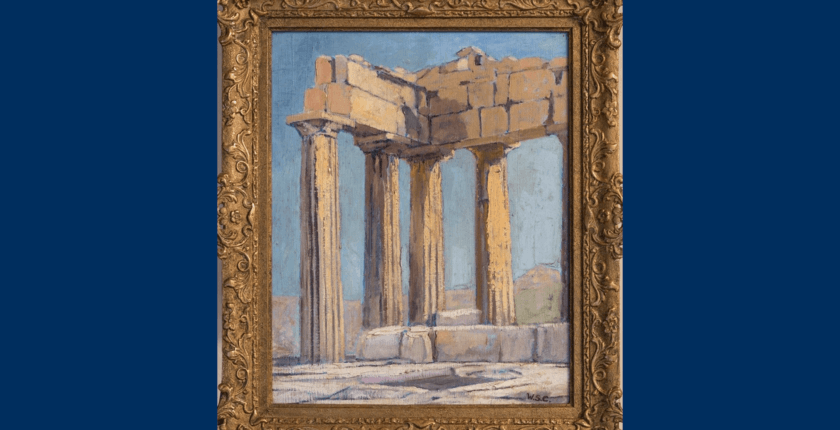 An important and until now unknown painting by Sir Winston Churchill, presented to German Chancellor Konrad Adenauer, has been discovered—with a story as intriguing as the work itself. The painting is part of an exhibition of the Churchill’s art at the Gunter-Grass Haus, Lubeck, through 12 February 2017. Its permanent home is Dr. Adenauer’s former residence: Stiftung Bundeskanzler-Adenauer-Haus, Konrad-Adenauer-Straße 8c, 53604 Bad Honnef-Rhöndorf, Germany.

Churchill gave the painting to Dr. Adenauer in 1956, when the British statesman was presented with the Charlemagne Prize in the German city of Aachen. Adenauer, West Germany’s first postwar chancellor (1949-63) was admired by Churchill as the man who led his country to its postwar recovery as a democratic republic. The prestigious Charlemagne Prize has been awarded since 1950 for “particular services for the unity of Europe.”

Tatjana Dübbel, curator of the exhibition, writes in the catalogue.

On 26 September 1934, Churchill and his wife Clementine set sail on the yacht Rosaura for a cruise of several weeks that took them from Marseilles via Greece to the Levant and on to Egypt. As guests of Lord Moyne, a close friend and colleague of the Churchills, they reached Athens after six days. From there the trip continued to the eastern Mediterranean. There, according to biographer Martin Gilbert, Churchill “swam and painted,” and created this picture of temple ruins, which is identified on its reverse as a portion of the Parthenon.
In a message dated 21 February 1956, Churchill’s secretary informed him of a conversation with the British ambassador in Bonn, regarding a birthday present for the German Chancellor: “He was quite sure that what would give most pleasure would be a picture (Dr. Adenauer has one by President Eisenhower).” Why Churchill decided on the ruined Greek temple as a present is not recorded. It may well be that with the choice of this motif he wanted to evoke their joint efforts to rebuild a destroyed and broken Europe. In addition to their shared devotion to democracy, the two statesmen were united by the desire to contribute to peace in Europe and the world after the terrible experiences of the Second World War.

While this picture is an unusual subject for Churchill, its importance for him is clear, not least in the way he chose to paint it, which shows considerable artistic confidence. This is most apparent in the differing forms of light and colour he used to portray the Parthenon columns, and in the way they so clearly differ from the powerful remains of the building shown above and below them. 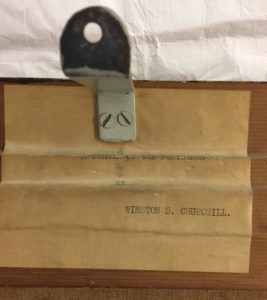 In total this is a very fine work by an experienced artist which, apart from its shared and ancient political subject, must be a reason why he would have chosen to present the painting to someone he especially liked and admired.

Churchill gave his pictures away reluctantly, and rarely. When he did, he always chose a picture as a gift whose subject had special meaning. Given that such a gift would have been chosen carefully, it seems possible that the ancient Parthenon would have a shared meaning with Adenauer, representing as it did the age-old and fundamental principles of democracy. Of course we shall never know whether in fact this was Churchill’s idea—but true or not, the fact of its giving is something I personally find very moving indeed.

Tatjana Dübbel adds: “As far as I know Adenauer had no special connection or interest in the Greek Republic. He did have a quite large collection of art, but above all he was interested in religious subjects, as he was very devout. He did travel to Greece in 1954, and the album of his press spokesman includes photographs of Greek temples. At a May 1956 dinner Bundeskanzler Adenauer said that even though he did not draw or paint, he did understand something about good paintings. Therefore he was so delighted to get a painting from Sir Winston Churchill’s hand, a very precious present that he will always keep in great honour.”

Painted circa 1934, “Temple Ruins” is a splendid example of Churchill’s work as an amateur oil painter. (Gunter-Grass Haus, Lubeck)